I’ve been through quite a few bikes over the past few years. I wore out the drive train on my Trek 7.2. I wrecked my Raleigh Clubman (and wound up spending 3 days in intensive care). I currently have an entry-level road bike, an aluminum Specialized Allez, and a cheap city bike, a Jamis Commuter 1.

Neither the Specialized nor the Jamis is suitable for light touring, the 200 and 300 mile rides I want to do this spring. You can’t mount a rack on a Specialized Allez. The Jamis is made of high-tensile steel. It only has 7 gears, and it weighs a ton. 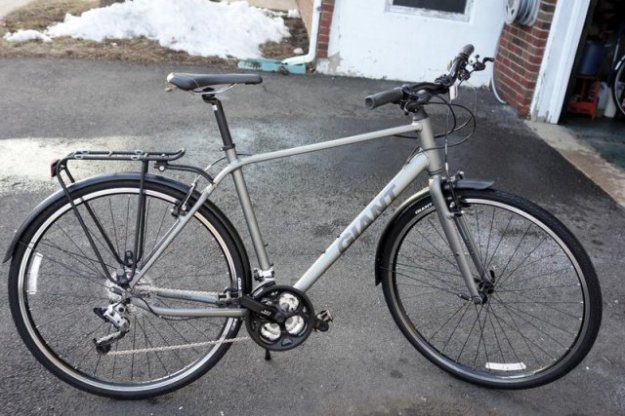 My requirements were the following.

Over the past week, the snow finally melted. Wednesdays rain storm washed away most of the salt. So I decided to take the Escape City for a test run. I chose my most difficult ride, 25 miles through the Watchung Hills, a course I regularly take on my Specialized Allez, a series of moderately to severely steep hills that will challenge even a good rider on a fast road bike.

The view from beautiful Summit, New Jersey.  It’s a town full of Ivy League Republican dads and entitled soccer moms with kids destined for Harvard and Wall Street. In other words, if the SUVs don’t get you the BMWs will.

Some day I’ll be rich and hip enough to live in New York.

How did the Escape City do?

In other words, so far so good. This bike will be serviceable for light touring and 50-100 mile day rides. Who knows. Next month I may hate it. But right now I don’t feel as if I missed out on anything paying 585 dollars for the Escape City instead of 1200 dollars for a Trek 720 or a Surly Long Haul Trucker. In fact, the bike feels so solid that over the summer (when I plan to buy a new drop bar road bike) I may look at the Defy 3 instead of another Specialized.

Note: I’m not a bike mechanic or an expert on bikes. I’m simply a guy who likes to ride. So don’t mistake this for a professional review.