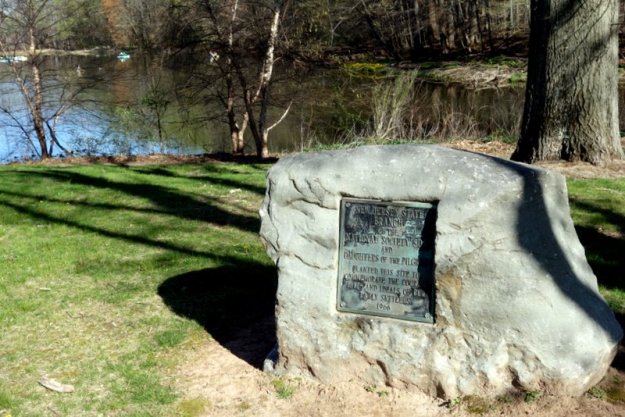 Echo Lake Park in Mountainside, New Jersey, despite having the ugliest 9/11 Memorial in America, is one of the most beautiful places in the NYC area. Right around the time I was born, the “National Sons and Daughters of the Pilgrims” decided it needed its own copy of Plymouth Rock. In a crudely historical and demographic sense, it makes no sense. New Jersey was founded by the Dutch. The towns surrounding Echo Lake Park have a few old WASP families, but most people in the area are descended from German, Irish or Italian immigrants, and cannot trace their ancestors back to colonial America.

On a larger cultural level, however, an imitation Plymouth Rock in Echo Lake Park makes all the sense in the world since it’s in the middle of affluent suburbia. In a sense, in the United States, anybody who aspires to the upper-middle-class, to own a house in Mountainside, or nearby Summit or Westfield, is a spiritual descendent of the Puritans. Only some of us, the weirdos and misfits, and only those of us who are consciously political, can claim for our spiritual heritage the Paris Commune instead of Massachusetts Bay. I struggle against the assumptions of ideological assumptions of American capitalism every day. Sometimes I succeed. Sometimes I fail. How odd therefore that tracing your ancestors back to the Mayflower has so much status in the United States when in fact we’re all trapped inside the prison house built by John Calvin and William Bradford.

2 thoughts on “Reading the Landscape: 13”