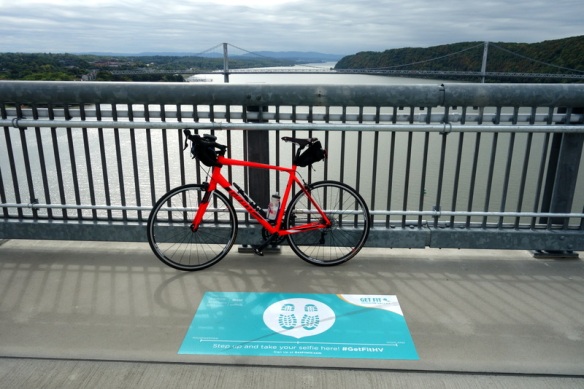 The Giant Contend 1 is cheap ($810 dollars) aluminum road bike sold by the Taiwanese bicycle company Giant. Giant, which runs a massive complex in Taichung, not only makes its own line of bikes. It also makes frames for more prestigious brands like Trek and Specialized. If you’ve purchased a bike that’s not a $10,000 dollar Italian Pinarello or Cinelli, there’s a good chance the frame was made in Taichung by Giant. There’s an even better chance that most of the parts were made by the Japanese company Shimano.

You could do worse than to think of road bikes the way you think of your desktop computer. A modern road bike is modular. Bicycle companies, like computer companies, are basically design companies. Your computer might have been designed by HP or Dell, but the CPU was made by Intel or AMD, and the hard drive was made by Western Digital or Seagate. Think of Shimano as Intel and SRAM as AMD and think of the bike’s groupset the way you’d think of a computer’s CPU. Similar to the way Intel makes the low-end Celeron and Core i3 and the high-end Core i5 and Core i7, Shimano makes the entry-level Claris and Sora, the mid-range Tiagra and 105, and the high-end Ultegra and Dura-Ace. The winner of the Tour de France is probably using Dura-Ace, but most cyclists no more need Dura-Ace than you need an 8-core supercomputer to use Photoshop.

The Giant Contend 1, which has a Sora groupset is similar to a computer with an i3 and 8 gigs of RAM. If you’re not a professional bike racer, it’s probably all you really need. Tiagra or 105 are reasonably priced and might be more appropriate for an enthusiast level cyclist, but if you want to spend no more than $1000 dollars on a bike, you’ll probably end up with Claris or Sora, and that’s OK. The groupset, of course, isn’t the only part of a bike. Since the Contend 1’s predecessor, the Defy 3, cost $960 dollars to the Contend 1’s $810, you can reasonably assume that Giant cut a few corners here and there to keep the price down. The stock tires that come with the Contend 1 are paper thin. They’re fine for riding around town (if the town has good roads) but if you’re anything more than the most casual rider, you should probably toss them and get a pair of Continental Gatorskins or Schwalb Marathons. Giant also cheaped out on the brakes, the chain and the cassette. The Contend 1 uses Tektro R312 brakes instead of Shimano Sora brakes, an SRAM PG-950 instead of a Shimano cassette and a KMC X9 instead of a Shimano chain. More on all this later.

Overall: I just completed a 500 mile, unsupported ride through upstate New York and the Berkshires (including a 30 mile terror ride through a driving rain storm) with no mechanical breakdowns.

The Giant SR-2 wheels:  I’m medium large (6 feet and 180 pounds). I ride my bike hard and for long distances over horrible roads, and I’ve ridden over 1500 miles so far without a single (that’s not even one) flat. I’ve hit potholes the size of ditches and haven’t been able to knock the wheels out of true. Even with a pair of expensive Gatorskin tires, the Alex Rims on my old Specialized Allez seemed to bring out all the flaws in each and every tube I used. I got pinch flats every few weeks. On the Giant Contend 1, even on an extended ride where I didn’t always have access to a floor pump and would often let the tires — which should be at 120psi — go down to 90 psi, I was getting so confident towards the end that I would never get a pinch flat or knock my spokes out of true I forgot where I put my spoke wrench and my 4 CO2 cartridges and 3 extra tubes almost felt like just so much extra weight.

The geometry: The Contend 1 has what’s known as an “endurance frame.” It’s built for long periods in the saddle, not for bursts of speed. Make sure you test ride it before you buy. I’m barely 6 feet tall and the Giant website indicated I’d need a “Medium/Large,” but the mechanic at my local bike store insisted that because I have a long torso and the Contend 1 has a slightly more upright position than my old Specialized Allez that I’d need a “Large.” He was right. The Large fits perfectly. Something about the bike’s geometry just feels right, not too racy, but racy enough to let me get down into the drops and build up speed. The Contend 1 is fast enough for me to dodge SUVs and 18-wheelers in city traffic and comfortable enough to ride for 100 miles on country roads without another soul in sight. I’m 51 years old and haven’t had a single upper body ache since I’ve been riding it, even after 100 mile rides.

The brakes: I came down out of the Berkshires in a driving rain storm and lived to write about it. The Tektro R312s seem just as good as the Shimanos would have been. Who needs hydraulic disc brakes?

The cassette: The Contend 1 has a SRAM PG-950 cassette with a wide range of gears. The lower gears in fact are almost like a mountain bike’s lower gears. If you live in San Francisco or Seattle and want a bike that can handle steep inclines, the Contend 1 is your bike.

The chain: Only 1500 miles and I’ve already worn out the cheap KMC X9 chain. My bike mechanic blames it on the 30 mile ride through the rain and my less than graceful shifting habits, but be that as it may, the KMC X9 was perilously close to snapping when I hauled the bike into the shop. Had my chain snapped up in the Berkshires or in upstate New York I probably would have had to leave the bike locked up to a tree, and just walked the rest of the way into the nearest town to look for the Greyhound station.

The cassette: While the SRAM PG-950 may have a wide range of gears, it’s tricky to keep in tune. The first week I owned the Contend 1, I had to take it back into the shop twice to get them adjusted. What use is a wide range of gears if they keep going out of adjustment? What’s more, in addition to wearing out the KMC X9 chain, I’ve also worn out the SRAM PG-950 cassette. That wide range of gears also accentuates my bad shifting habits, so much so that my bike mechanic was able to pick out which gear I used the most, the third gear. I don’t really need those two lower ones. So I’ve replaced the SRAM PG-950 with a Shimano branded 11-25.

The bottom bracket and hubs: I’ve already begun to notice an intermittent clunk in the bottom bracket when I take the Contend 1 up steep hills. This might be that the cheap aluminum frame doesn’t hold up to the kind of stress I can put on it. It might also just mean that the cups and bearings need adjustment and a layer of grease.

(update: The clunk was the rear hub, which I eventually had to get repacked for $36 dollars.)

The saddle: I immediately swapped out the Contend 1’s stock saddle for my leather Brooks Swift. So I haven’t used it.

The Giant Contend 1 is a serious bike at the incredibly low-price of $810 dollars. It’s fast enough for hellish city traffic and comfortable enough for 100-mile rides through the country. It took me 500 miles through upstate New York and the Berkshires, 30 of those through steady rain, without breaking down once.  Just make sure to swap out the paper thin tires and get ready to replace the stock chain and the stock cassette sooner than you would have otherwise thought.

A man in a bike store in Old Saybrook Connecticut (where I stopped to pump up my tires) told me that he’d never spend $810 dollars on a bike, that he still owned the cheap mountain bike he got in college. After another few minutes of conversation, he also told me he owned a boat. We all have our priorities I guess.

5 thoughts on “The Giant Contend 1: The Preliminary Review”