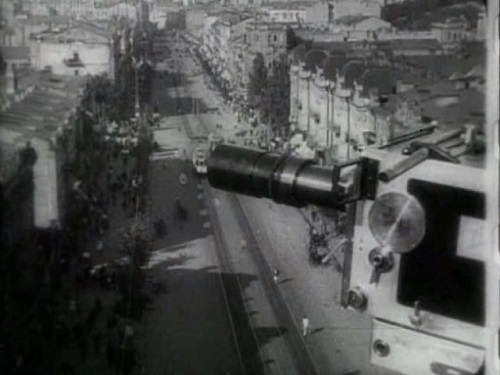 When it came to his date of birth, David Abelevich Kaufman, better known by his adopted name Dziga Vertov, had perfect timing. He was 22 in 1917, just coming into the prime of his life during the early years of the Russian Revolution. “Bliss was it in that dawn to be alive ,” William Wordsworth once wrote, looking back at the French Revolution, “but to be young was very heaven.”

While many of us think of communist art along the lines of the dull, socialist realism it would later become under Stalin – “boy, girl, tractor,” as a professor of mine once said – the 1920s in the Soviet Union were the golden age of experimental cinema. One only has to remember how many technical innovations Hollywood stole from the Sergei Eisenstein, the greatest of all Soviet filmmakers, to understand the debt that the capitalist American cinema owes to the communist avant-garde. The Soviet film industry in the 1920s was in fact so rich and so varied that Vertov rose, not as a protege of Eisenstein, but as one of his harshest critics.

By the 1920s, cinema, Vertov had decided, had become overly dependent on theater. The Odessa Steps sequence in Battleship Potemkin, while great propaganda, was not genuinely revolutionary art. It was melodrama. That Brian De Palma borrowed some of Eisenstein’s techniques for The Untouchables, a propagandistic film glorifying the early days of the FBI, testifies to Vertov’s insight. As great as Eisenstein was, reactionaries regularly steal his revolutionary techniques for their own reactionary agenda. Melodrama can serve revolution. It is not revolution.

A Man With a Movie Camera opens with an announcement that the film is “an experiment in cinematic communication of real events,” that it does not have “intertitles” (cue cards describing the plot), or even a story, that it is not dependent on “theater,” and that it aims at creating a “truly international language of cinema based on its absolute separation from the language of theater and literature.” What follows is a highly stylized documentary about a day in the life of a rapidly industrializing city in the Soviet Union. It’s a “real” city according to Vertov but since it’s also a composite of three real cities, Moscow, Kiev, and Odessa, it would perhaps be more appropriate to call it a “fictionalized real city” or a “representative city.”

Building a stage out of a composite of two or three cities is a fairly common technique in American filmmaking. Toronto, for example, often stands in for New York, but that’s mainly because film crews are cheaper in Canada than in the United States, not because of any conscious, aesthetic choice. Vertov is not building a stage, a stand in for Kiev, Moscow, Odessa, but rather, an image of the future of socialism out of the raw material of three Russian cities of the present. Vertov’s socialism is not a fictionalized socialist utopia, but a work in progress, the use of film to build new forms of perception that allow us to see the possibilities of the future as they exist in the present. His technical innovations, the split screens, jump cuts, off kilter angles, tracking shots, and above all the extremely short “average shot length” are not technical innovations for the sake of developing technical innovations. They’re not empty formalism devoid of content or the building blocks for a cinema of the future.

Vertov’s technical innovations are the cinema of the future, even, I have to stress, of today. Some of Vertov’s camera work – and his wife Yelizaveta Svilova’s editing – is so startling and so exhilarating that watching it for the first time feels a bit like discovering Mozart or Wagner for the first time. There are geniuses in western cinema, John Ford, Orson Welles, Frank Capra, Jean Renoir, Luchino Visconti, Andrej Wajda, but none of them quite rise to the level of revolutionary geniuses. John Ford, for example, is the reflection of New Deal liberalism in cinema. Visconti is an acid upper-class critic of capitalist decadence, Wajda a gifted survivor who produced great movies under Stalinism, post-Stalinist communism and capitalism with equal skill, but neither Ford, Visconti nor Wajda managed to harness the very act of filmmaking to a genuine revolution, if only because none of them lived through a genuine revolution. In that, Vertov stands alone.

Perhaps the key moment of Man With a Movie Camera, maybe not the best or the most beautiful moment, but certainly the most representative, comes halfway through the film. Vertov shows a women in a beauty salon having her hair styled. Spliced into the footage of the beauty salon is the image of a lower working-class woman in the streets shoving coal. Her face is dirty. She’s prematurely aged. She notices the camera and flashes an embarrassed smile, but the whole sequence is not an illustration of social injustice, or inequality, but one of progress. It’s hard for an American in 2016 to imagine living in a backward, predominantly rural society – most of us live in suburban sprawl – but that’s precisely what Russia was in 1929. Vertov’s focus on urban Russia is also a focus on the dynamic, modernizing influence of Lenin and the Russian Revolution. We do not see the woman in the beauty salon as bourgeois. Rather we see her as the filthy, prematurely aged woman in the streets transformed by socialism into a well-groomed citizen of the new Soviet Union.

If Vertov stopped here, of course, Man With a Movie Camera would be fairly standard socialist propaganda, a bit more dynamic, perhaps, but nothing genuinely innovative. What follows is so startling, even in 2016, that it quite literally transforms the viewer’s perception of what film can do. The simple montage of the two woman becomes a staggeringly complex montage of the whole of Soviet society, of the empowering quality of cinema. As the camera focuses on a telephone switch board, wires crossed over wires, and a line of female telephone operators routing and re-routing calls, we see another woman making boxes in a factory. We see women making clothes in a textile factory. We see a man directing traffic. We see an accountant keeping records and a cashier at her cash register. We see a typewriter and a printing press running off an edition of a newspaper. We see the boxes the woman is making being filled with cigarettes – the idea that making cigarettes available to the people is a worthy socialist goal hasn’t aged quite as well as the rest of the film – before we cut back to the switchboard, filled with more and more lines being connected. We see Yelizaveta Svilova see editing the footage that Vertov and his brother Mikhail Kaufman shot over the course of five years. We see the entirety of what the urban Soviet Union looked like in 1929, a form of perception made possible only by film, and one that had not been possible up until that point. Vertov, the filmmaker as Prometheus, has given fire to the people, used the cinema to allow anybody who could walk into a movie theater the ability to see across the length and breath of the Soviet Union as if he or she were a god.

We need to get back to this kind of revolutionary cinema.