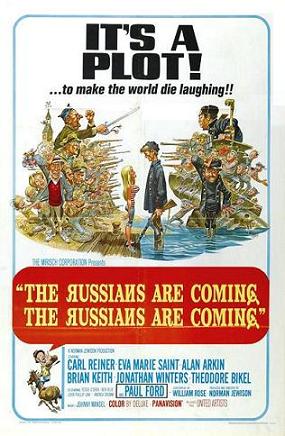 Now that the Clintons and their surrogates in the media are trying to revive the Cold War, it’s as good a a time as any to revisit The Russians Are Coming, the Russians Are Coming. The last time I saw Norman Jewison’s classic farce was all the way back in 1984, when it seemed like a welcome antidote to Ronald Reagan, the jingoist Los Angeles Olympics, and Red Dawn, which had been released that Summer. After watching it again, in 2016, I came away with the impression that while it never had very much to say about the Cold War, it has a lot to say about the assumptions of American liberalism.

They are as follows:

The typical Russian is a befuddled everyman who doesn’t really want war.

The United States government is basically good, but largely ineffectual, and absent from the lives of most Americans.

Good looking young people, whether Russian or American, are more interested in sex than in national differences.

The American liberal intellectual is neither a conservative, nor a rebel and a malcontent, but an apolitical, upper-middle-class family man just trying to make a living.

Boys are rough little pains in the ass who totally buy into Cold War Propaganda and American nationalism.

Upper-middle-class American women are more sensible level-headed than than their husbands.

In the end, American or Russian, conservatives or liberal, communist or capitalist, man or woman, we’re basically all just lovable characters one big sitcom of humanity.

The Russians Are Coming, the Russians Are Coming opens with a Russian submarine in the shallow waters off a small, New England island that will probably remind you of Martha’s Vineyard or Nantucket. The Russians Are Coming, the Russians Are Coming was actually filmed in Bodega Bay, California, but Jewison goes out of his way to make sure we hear the locals speaking with a Boston accent so thick there’s no mistaking it. We’re in Massachusetts. The Captain, a bluff, intimidating, but as we will eventually see, basically good-hearted man played by Theodore Bikel wants to get a good look at the New England coastline, not because he’s spying for the Soviet government, but just because he’s curious about America. That the sub, named Спрут, the “Octopus,” runs aground, not particularly surprising when you realize that it’s a crappy old diesel powered vessel that was probably obsolete at the beginning of the Second World War. This Russian crew is not exactly the Kremlin’s A Team, something that becomes even more obvious when the captain sends a landing party ashore to steal a boat to tow them off the sand bar.

It’s not that the leader of the landing party, Lieutenant. Yuri Rozanov, played by a hilarious Alan Arkin, is particularly dumb. It’s just that he’s not particularly military. He has a lot more in common with Walt Whittaker, a New York playwright spending the Summer on “Gloucester Island” than he does with the Russian Captain. His fake Russian accent and perfect sense of comic timing would recall Yakov Smirnov, if Smirnov had any talent, as well as an earlier generation vaudeville performers. Arkin and Carl Reiner, who plays Walt Whittaker are both descended from East European Jews, and this is important. While Arkin the movie codes Alan Arkin as“ethnic white with hilariously funny accent” it codes Reiner as “ethnic white so completely assimilated he might as well be a WASP.” The Russians Are Coming, the Russians Are Coming is as much an immigrant and assimilation story as it is a Cold War story. It’s not too much of a stretch to see Rozanov and the Captain as Russians who secretly wish their grandparents had emigrated to the United States before the Cold War started.

I don’t know how authentic Alan Arkin’s Russian accent is but his comic timing is flawless.

When Lieutenant.Yuri Rozanov and his men, including a young sailor named Alexei Kolchin, played by the blond, 6’4” John Phillip Law, take Walt Whittaker and his wife “Elspeth” hostage, we’re not really worried anything will happen to them. Afraid of both the American government, and their own, they’re desperate to drag the submarine off the sandbar and make their way back home, but we know deep down inside they’re not bad people. The contrast between Jewison’s Russians and the Russians in Red Dawn, who start machine gunning high school teachers as soon as they parachute into America, couldn’t be more stark. The Russians of The Russians Are Coming, the Russians Are Coming are just like us. That doesn’t mean they haven’t unintentionally stumbled onto what could quickly turn into an international incident. To say that the townies, the people who don’t go back to New York or Boston for the Summer, aren’t as level-headed as Walt Whittaker is putting it mildly. Before long, everybody in town has a rifle or a shotgun, and an ever growing lynch mob is prowling the island looking for commies. Even Walt Whittaker isn’t immune from the anti-communist hysteria. He attacks Alexei Kolchin, who Rozanov left in charge while he and the rest of the landing party have gone into town, and disarms him. Kolchin, who’s an athletic, well-built man in his twenties could have easily overpowered the middle-aged playwright, but he still feels so guilty about having accidentally pointed a gun at Whittaker’s little girl that he basically lets him win. Whittaker, on the other hand, even though he had no trouble disarming the young sailor, just can’t seem to make it clear to anybody in town that there isn’t a Russian invasion, just a lone sub that went aground. Whittaker, like Rozanov, is highly effective one minute, a bumbling fool the next.

From the urban, New York intellectual Whittaker’s point of view, the anti-communist mob on the island is just as frightening as the Russians. The Russians Are Coming, the Russians Are Coming is a broadly comic, slapstick satire on McCarthyism, but it is a satire on McCarthyism nonetheless. Nobody on this little island off the Massachusetts coast seems remotely competent at their jobs, let alone prepared for a Russian invasion. The Police Chief played by Brian Keith is level headed but ineffectual. His deputy quickly joins an anti-Communist posse led by Fendall Hawkins, a complete buffoon who runs around with a wearing a Massachusetts VFW hat and brandishing a cavalry saber. Indeed, the only person on the island who seems even remotely aware he’s living in a maritime community is the Walt Whittaker, who assures Rozanov that “boats go around all the time around here.” The Russians are as paranoid about the Americans as the Americans are about the Russians, never quite able to admit to themselves that in a small town of less than a thousand people they stick out like sore thumbs, that it would be better simply to find out who’s in charge of the harbor and explain their dilemma. The idiocy of the Cold War, Jewison is telling us, has not only made bumbling fools of us all, but has created a situation where either side could start World War III without even wanting to. Eventually of course the standoff between the Russian submarine, which manages to get itself off the sandbar and sail into town looking for the landing party, is peacefully resolved. When it comes to saving the life of a child, both Russians and Americans are willing to put aside their differences.

But it is the budding romance of Alexei Kolchin with Alison Palmer, a neighbor played by a platinum blond actress named Andrea Dromm that really seems to point the way out of the Cold War. Except for a somewhat dimwitted airport mechanic, Alison seems to be the only adult on the island under thirty. She and Alexei also seem to be in a completely different movie. Where Walt Whittaker, Yuri Rozanov, the Russian Captain and the rest of town inhabit the world of frantic, broad farce, Alison and Alexei are in a world of romance. When they walk the beach with the Whittaker’s little girl Annie, Jewison’s takes get longer, the camera lingering on their good loocks and on the natural beauty of the island. Alexei talks about how he was taught to hate Americans but that he’s never believed any of it. Alison agrees that hating people is a waste of time. Annie waives to Alexei, blissfully unaware that he’s her enemy, or even a foreigner. Young people, Jewison is telling us, couldn’t care less about the Cold War. When Rozanov and Whittaker stumble back into Whittaker’s now idyllic Summer home, it’s not only a clash of generations, it’s a clash of two very different methods of filmmaking, a sitcom crashing into the world of a lazy European art film. When the Russians go, we are sorry to see them torn apart, not only Alison and Alexei, but Whittaker and Rozanov, both of whom would be a fun couple of guys to have a beer with, if only the Soviet and United States government could end their conflict.

So what can The Russians Are Coming, the Russians Are Coming tell us about today’s conflict between the United States and Russia? Sadly, I think, the urbane liberalism of Norman Jewison and Nathaniel Benchley – who wrote the original novel the movie is based on – no longer offers any answers. It’s not dumb conservatives like Fendall Hawkins who are pushing for a new Cold War, it’s the very liberal elite that, in the 1960s, were beginning to question the old one. It’s not a mob of ignorant townies we have to worry about. It’s people who graduate from Harvard and Yale. Walt Whittaker no longer writes musical comedies and pals around with Russian sailors. He writes conspiracy theories about secretive ties between his political opponents and Vladimir Putin or long, jingoistic think pieces about how the Russians are trying to manipulate American elections. Perhaps Benchley should have looked deeper, explored the ways that Fendall Hawkins and his mob were being manipulated by the ruling class and by the corporate media, but that, of course, would have been a different film. And it wouldn’t have been as funny.