I run 7.1 miles, usually late at night, five times a week. There was a snowstorm today, and running after a snowstorm is always a hassle. Nevertheless, snow makes for good light to take photos, so I grab my camera and go.

It’s hard to imagine a more insignificant little town than Kenilworth, New Jersey, or a more architecturally nondescript town hall. But they keep the lights on all night and it looks pretty in the snow. 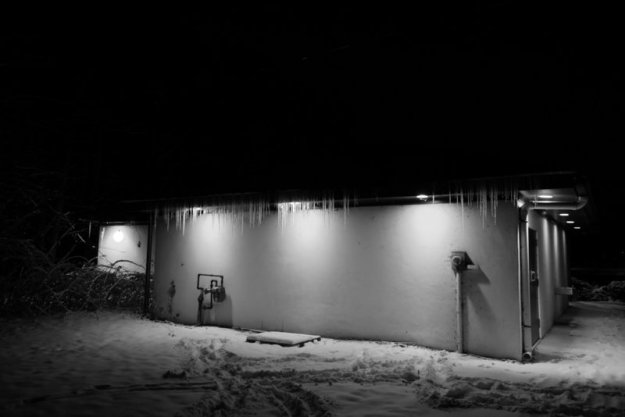 I stop to count the icicles.

Earlier today this intersection was full of police cars. A man died here last night, a teacher at a local high school. They found his body floating in the river this morning. Usually this intersection just annoys me. It’s always full of drunks stumbling out of the local bars, or walking home from the NJ Transit station. I ran past it tonight. I expected to find it a bit creepy, but I didn’t. It looks the same as it always does.

They found the body in this river. The newspapers haven’t released much information. The comments sections are full of speculation that it was a suicide, but I’m skeptical. The river is very shallow, only about three or four feet deep, so it’s unlikely anybody who lives in the area would imagine you could kill yourself by leaping over that metal railing. That building in the background is a popular local bar. My guess is that he had a few drinks there alone, then decided to walk home. Perhaps he felt nostalgic for a river he had known in his youth, leaned over, slipped and fell into the water. Over the past week, the river has been swollen by rain. It’s also full of that thick mud that you can sink down into up to your knees, the kind of mud can make even a very shallow river dangerous. I suppose they’ll release more information when his family talks to the press. I can imagine that it would be pretty stressful being one of his students.