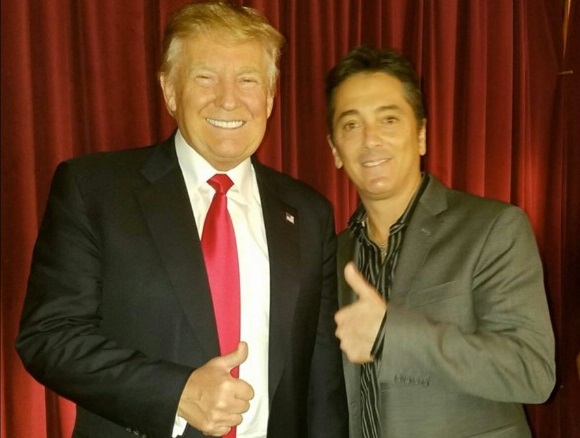 After a long layover, Radio Without Money, the official WritersWithoutMoney.com podcast, returns as Aloysius VI welcomes Daniel Levine back from his brief layover in a re-education camp. We discuss the fire and the world currently on it, the firing of FBI Director James Comey, leftist opposition to the idea of the existence of any kind of collusion between Donald Trump and the Russian government, the ever-closing walls that surround President Donald Trump, and some other stuff too probably, who knows?

<-Check out the last episode!

Check out the next episode!->

On my brother’s recommendation, I visited the National Museum of Mathematics in New York City. Founder and President Glen Whitney, an ex-math professor and hedge fund “quant,” graduated from our shitty high-school in Roselle New Jersey. My brother knew him. I didn’t, although his older sister might remember me singing “Back on the Chain Gang” in home room, the closest I could come as a teenager to a sociological analysis of of the American public school system.

People who do remember me in high school will remember me as being very good in history. My eleventh grade teacher Mr. Kelley used to have a “stump Stanley” quiz on Friday afternoon. My fellow students could ask me questions about United States history. I suppose he was trying to combine the joy of bullying a classmate with the educational process, but the joke was on him. I never got a question wrong. Nobody ever “stumped Stanley.”

I doubt anybody remembers that I flunked math. Interestingly enough, I got a respectable score on the math section of the SAT — it was good enough to get me into Rutgers and would have probably gotten me into one of the Ivies if I had had the grades — but I just couldn’t apply myself in geometry class. Eventually I got so sick of pretending to care I simply put a big “X” mark through the weekly quiz with the caption “I refuse to take this test” underneath. Nobody ever commented, or even noticed. I simply took the “F” and retook the course the next year.

The purpose of the National Math Museum is to reach the kind of kid I was, someone who’s smart enough to pass high-school math but just finds it too dull to apply himself. Recently, I’ve gone through a few basic Algebra texts. I’m thinking about going back to school to get a computer science degree to supplement my useless BA in English. Little has changed since the 1980s. Math textbooks are almost always poorly written. I’ve worked my way through instructions on basic Algebraic equations I understand perfectly only to come out utterly confused. I don’t envy parents with children who get stuck with bad high school math teachers or text books. I shudder to think what it’s like now with “Common Core.”

The National Math Museum doesn’t look like much when you walk in the front door. While it’s right down the block from the Flatiron Building and very easy to get to, it’s expensive, $16 dollars per person. That not only puts it out of the reach of most working class families, it makes you expect a lot more than what you see at first sight. Nevertheless, the more you explore the Museum, the more you realize how you can’t possibly experience the whole thing in only one visit. Every exhibit — and there are dozens — can take hours to get the hang of, but after you’re done, you’ve had a complex mathematical subject drilled into your head so thoroughly you’ll never forget it. 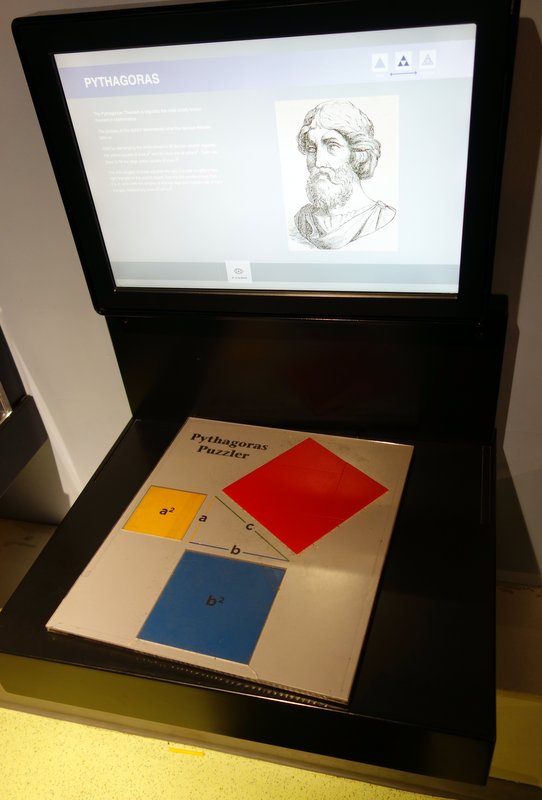 I eventually settled on the “Pythagoras Puzzler.” The concept is easy. Among the three sides of a right triangle, the square of the hypotenuse (the side opposite the right angle) is equal to the sum of the squares of the other two sides. You get five flat, plastic shapes. There are three empty squares. All five pieces go into the two smaller squares and into the one larger square. Getting them to fit into the smaller squares is easy. Trying to figure out how to make them fit into the larger one looks easy, but is deceptively difficult. It has to work. According to the Pythagorean Theorem, the sum of the space inside the two smaller squares has to equal the space inside the larger square. It’s a “mathematical certainty,” but good luck making it work. I sat there for almost twenty minutes scratching me head before a helpful thirteen-year-old girl finally helped me figure it out.

In any event, sit at the “Pythagoras Puzzler” for 20 minutes and the Pythagorean Theorem is yours forever. Work through all of the machines in the National Museum of Mathematics and you’ll probably be ready for MIT or Caltech. It’s a great place you should go to over and over again. I only wish there were a family discount. Glen Whitney, like my brother and I, went to a working-class high-school in New Jersey. He should make his museum accessible to the kids who really need it, not just rich kids in Manhattan who probably have great math teachers in high school anyway.

1) Donald Trump obviously colluded with Russia. I’m not really sure how any reasonable person could conclude otherwise after he’s fired three separate people investigating into it and multiple aspects of the Steele dossier we all thought sounded ridiculous a couple months ago have been confirmed. He also mentioned in his letter about Comey’s firing “You told me I wasn’t under investigation 3 times.”

2) Trump learned politics from Roy Cohn, one of the most toxic figures in US history. Cohn’s entire strategy was “Never back down on anything and attack anyone who questions you, personally.” Richard Nixon could eventually be cornered into stepping down. Trump will, when cornered, retaliate with any means at his disposal. He’s already done this throughout his life and in his short political career.

3) Trump doesn’t have any real incentive to back down in any capacity at this point because the only way this ends is with his total consolidation of power or with his going to prison/frying.

4) Don’t be surprised if it turns out McConnell and Ryan and others got in on it. Rumors are already spreading on twitter to that effect, and they’re not standing behind Trump at this point because it makes them look good.

5) Trump established a “committee” to investigate the completely bogus “crisis” of “voter fraud” this morning. Translated: there’s a committee figuring out how to fix the 2018 and 2020 elections through suppression of the vote. Anyone who thinks he isn’t going to try to convince his base to go to the polls next year armed to the teeth to scare off potential voters hasn’t been paying attention. Remember the “my second amendment people” comments?

6) You all know I’m about as far to the left as anybody. I don’t like the DNC, I don’t like how they handled the Sanders thing, I don’t like their connections to Wall Street, etc etc. However, the US falling into banana republic status doesn’t help anybody. The DNC doesn’t seem interested in taking all the chips off the table, and for now that’s the best we’re gonna do. You can save the “I told you so” whatever bullshit for later. This isn’t about you or me being right, this is about stopping a racist mad man from consolidating unilateral control of a massive domestic police force and the most comprehensive surveillance apparatus in human history.

7) Trump is only cornered this much so far and he’s already doing this stuff. He has no knowledge of policy or how government actually works. When his economic policies inevitably fail, he will attempt to consolidate power through appeals to violence. This is a common strategy of dictators-let the disgruntled population take out their anger on each other instead of going after the guy at the top. Mao did it, Duterte is doing it. Trump’s campaign manager, Manafort, was involved in the violent consolidation of power in Russia. Putin had his own Reichstag fire. Trump will inevitably try to declare a war/stage his own Reichstag fire/both in order to avoid having to back down. Trump has repeatedly voiced his admiration for authoritarian lunatics ranging from Duterte to even Kim-Jong Un.

I’m not really sure what we do from here.

When does late capitalism end and whatever the other thing is start?

Now more than 100 days into the national embarrassment of the Donald Trump administration, the entire tide of everything seems to have changed. All these disparate problems we’ve been complaining about on this blog have recombined themselves into a seeming perfect storm. Nothing is quite like it was. If someone had sent me the phrase “Rape is a pre-existing condition” a year ago, I would have presumed it was a line from Andrea Dworkin, or an album by a hardcore band. But then…well…here we are.

Postmodernism, a body of theory dealing with the cultural logic of late capitalism, doesn’t quite cover it anymore. Trump is definitely postmodern in the extreme-here’s a guy whose public image is that of a womanizing playboy despite his, as his ex-wife put it, “difficulty maintaining and achieving an erection,” the ultimate businessman despite his having declared bankruptcy and generally having failed in any of his actual business endeavors, a Republican who was until a couple years ago a Democrat, the harbinger of “change” promoting ideas that seemed old in 1950. Equal parts Billy Mays, George Wallace, Zapp Brannigan and Jay Gatsby-a phantom whose teflon qualities seem to stem less from nothing sticking to him so much as there not being enough of a him for anything to stick to.

And across the globe we’re seeing candidates with a similar lack of substance beyond right wing anti-immigrant rhetoric and a day-time TV temperament.

Endless theories have been proposed to explain Trump’s base because none of them seem big enough to actually feel satisfying in the face of how stupid and pointless and tragic this all is. He’s clickbait in human form. A limp and dinky ground ball that slowly puttered between America’s legs. Maybe the thing after late capitalism should be called Bucknerism.