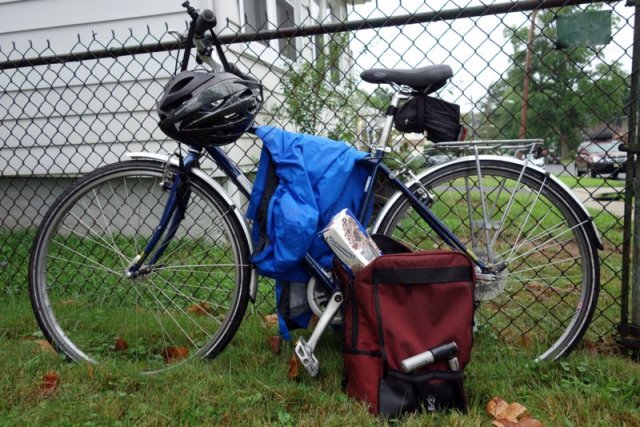 Back in 2008, right after the beginning of the “great recession” I moved back into the basement of my childhood home. It was only supposed to be for a few months until I found another apartment in the city, but we all know how that goes. Getting a lease in Michael Bloomberg’s hyper-gentrified New York was much easier said than done. So I stayed in my hometown of Roselle, a suburb of Elizabeth, about fifteen miles from downtown Manhattan. For years, like everybody else in New York City, I had been carless. Why bother finding a place to park when you can just take the subway? New Jersey is another story. Nevertheless, I never bought my own car. Not only did I have access to both my parents’ cars, since my mother and father were declining — they were already in their 30s when I was born — I was expected to do most of the driving. After my father died in 2011 and my mother broke her hip the next year, leaving became out of the question. There was no way she could have done her own grocery shopping or functioned without my help.

I’m still in the same basement. Both my parents are gone. My mother, who broke her hip for the second time this March, died slowly and painfully over the course of the Spring. A second broken hip in less than five years would have been difficult, not only for an 81-year-old woman, but for a 30-year-old woman, but it was much more. After the doctors operated on her hip, she developed intestinal problems so severe that she had to go back to the hospital for a second round of surgery. The second surgery, or, to be more specific, the anesthesia for the second surgery, killed her mind. It was so excruciatingly painful for so long that she spent most of the time calling for painkillers, almost as if she had been a wounded soldier in film about the Second World War. “Medic. Corpsman. Morphine.” Then her lungs went, then her heart. In the final weeks of her life, my mother probably weighed sixty five or seventy pounds. It was painful to look at her. Only later did I realize that she had in fact been close to death for almost a year, her bodily functions carefully regulated by a veritable pharmaceutical company of prescription drugs, her life’s energy slowly but surely draining away.

My brother and I inherited the house, a gigantic, dilapidated old colonial dating from the Nineteenth Century that’s essentially worthless because of the town’s shitty schools and ruinous property taxes. If I wind up pocketing $20,000 dollars, I’ll be happy. I also inherited the two cars, either of which I could have kept, but I decided to sell both. Why? I suppose the most important reason is money. The cars brought in a badly needed $3000 dollars. There was also the cost of insurance, and repair. One car needed a new front windshield. The other needed four new tires. There was the price of gas but none of it was really decisive. I could have probably swung the price of the insurance and the repairs had I really wanted to, but I didn’t want to. I have a shitty menial job in a warehouse six miles away from where I live. Driving to work feels like an embalming process. You shit, shower, shave, put your clothes on, and then get into your 3000 pound metal death box. You turn on the radio and the air-conditioning to separate yourself from the outside world, to give yourself the illusion that you are in control of your environment. You are not. The songs on the radio have been chosen for you by corporate America. As aggressively as you drive, you’re still part of traffic. Weaving from lane to lane will not get you to where you are going any faster. You stop when the traffic lights tell you to stop. You start when they tell you to start. You are, essentially, a piece of a machine. 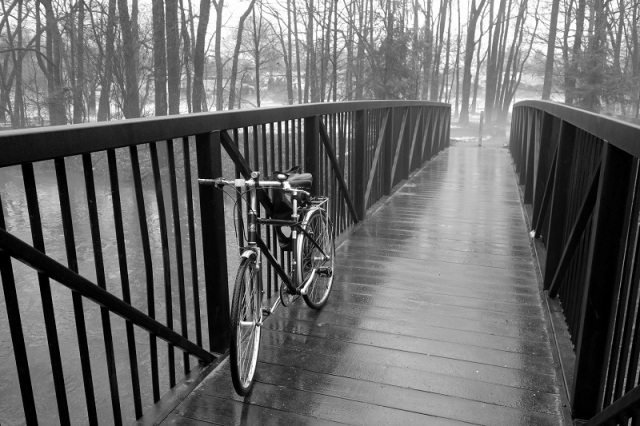 Cycling is different. Sure the bike I ride was made in a factory somewhere in Taiwan. I ride on the same roads as I did when I drove my mother’s SUV. I stop for red lights. I resume pedaling at green lights, but I don’t really have to. On a bike, I retain some portion of my individual identity. I’m a statistical error. No cop is going to arrest a cyclist for running a red light, if only because he’d have no idea how to fill out the paperwork. I move with the overall flow of traffic, and yet, I move around inside the overall flow of traffic at my will. Sometimes it’s dangerous. New Jersey is not Amsterdam. There are places on the roads in between my house and my job where a cyclist simply cannot obey the rules of the road without getting killed, where you must, for example, ride in the “right turn only” lane even if you’re going straight. The traffic in the other lanes is too heavy and too fast. At other times its liberating. I’ve never felt so arrogant as I did the week after Hurricane Sandy swerving into the middle of usually busy, now empty roads past long lines of cars waiting in gas lines. Hurricane Sandy had stopped America in its tracks. It hadn’t affected me at all. Most importantly of all, however, riding to and from my job transforms the job itself. It’s no longer a destination. Even though it’s demanding physically, it becomes a rest stop between rides.  I ride the day’s tension off in the evening. I come to work relaxed. That bridge in the woods, I get to see it every day.

There are of course difficulties. There are flats. Two weeks ago, I got two pinch flats in one day. I wound up destroying my spare tube, and walking 3 miles to a bike store in the humid, 98 degree weather. I’m not exactly sure why it’s so easy to fix a flat at home and so tough on the road, but I’m sure other cyclists will agree with me that it’s more than just the relative ease of using a floor pump compared to using a mini-pump. It’s an art, not a science. You need to be able to isolate yourself from the outside world to the point where you feel as if you’re sitting at home in your garage. Getting a flat coming home from work is frustrating. Getting a flat on the way to work might mean being late and getting fired. There’s traffic. Cars are bad enough. But I ride almost a mile through an industrial area of Woodbridge, where I not only have to dodge huge 18-wheelers, I have to dodge huge 18-wheelers driven by trainee drivers. There’s a “Get Your CDL” school not far from where I work. There are gigantic potholes. There’s dirt. There’s debris. There’s inclement weather.

Inclement weather has turned out almost to be a pleasant surprise. In the Spring, I bought a good set of rain gear. Every Friday this Summer, it seems, we get heavy rainfall. Last week it rained so hard it came through my rain jacket and soaked me to the bone. I brought an extra shirt and an extra pair of socks, but not an extra pair of shoes. I was miserable and wet all day. This week I was better prepared. I tied my rain jacket down properly. I brought spare shoes. It didn’t rain as hard. As I road home through the misty drizzle, I began to feel myself getting back in touch with my body after the long, hellish Spring of my mother’s death. The oppressive heat of the previous day had dissipated. The moisture on my cheeks reminded me of my early 20s when I used to hitch hike through northern British Columbia on my way to work in Southeast Alaska. I was young again. I was free again. Death no longer hovered over me like a dark cloud. It was rain, simply rain, nothing more.

← Images of My Suburban Dreamworld: 9
On Leftist Twitter Mobs →