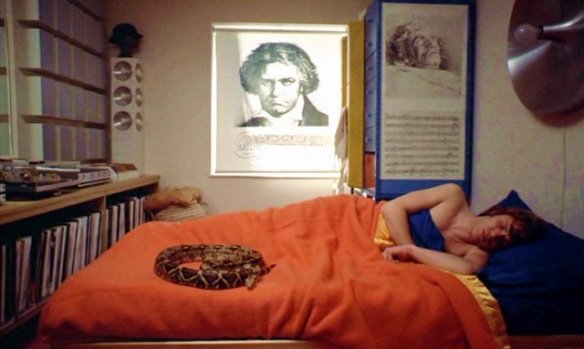 While most fiction has an element of the the utopian — has anybody fallen quite so immediately and passionately in love as Romeo and Juliet? — or the dystopian — was London really as bad during the Industrial Revolution as it is depicted in the novels of Charles Dickens? — the modern “dystopian novel” as a genre was invented in 1908 by the American socialist Jack London. The 1890s had been the golden age of utopian fiction by genteel, upper class socialists. News from Nowhere by William Morris and Looking Backward by Edward Bellamy had both imagined a future without war, poverty, or crushing, repetitive labor, but neither seemed to have any idea how to get there. Jack London, a revolutionary Marxist who saw history in terms of class conflict, knew that it wouldn’t be so easy. In The Iron Heel, still the greatest of all dystopian novels, he dramatized just how far the rich were willing to go to defend their money and power against a challenge from the working class. Militarized police, a totalitarian torture and surveillance state, gated communities for the rich, London got just about everything right. The Iron Heel is now non-fiction.

The historical moment that produced The Iron Heel is what Lenin referred to as “the highest stage of capitalism.” By 1908, the industrial revolution had long been completed. The railroads had been built. The trans-Atlantic cable was already a half century old. Germany, France and the United Kingdom had great, industrialized mass armies and navies that represented the cutting edge of early Twentieth Century technology. HMS Dreadnought, the first modern battleship, for example, was launched in 1906. If neither Gustave Flaubert nor Charles Dickens wrote dystopian fiction then it was partly because the world they lived in was not yet complete. Capitalism was still in the socially progressive era of the revolutionary bourgeoisie. By 1908, however, a question had crystallized in the minds of the most advanced, far seeing intellectuals and artists. What would come after capitalism? Would it be socialism or barbarism? For Jack London, it would be barbarism, and then some. It would be exactly the kind of totalitarian society that became reality in the 1930s.

By the 1930s and 1940s, Jack London had produced two notable imitators, Sinclair Lewis and George Orwell. Lewis’s It Can’t Happen Here, inspired by his wife, the anti-fascist journalist Dorothy Thompson, imagines what the United States would be like under the Nazis. It is, to be perfectly honest, a pretty bad novel, badly plotted, with paper thin characters and ponderous, wooden dialogue, and an ending where Lewis simply gives up writing fiction and descends into half baked alternative history.  It has one good moment, the two Marxist sectarians who refuse to ally with “bourgeois liberals” in the concentration camp. 1984 is somewhat better as a novel, but it’s basically just a ripoff of The Iron Heel, with Stalinist Russia standing in for capitalist America. Orwell had forty years to improve on the original, and all he could really come up with was TV and newspeak. The reason is obvious when you really think about it. Who needs dystopian novels when history has already given you Nazi Germany? What’s more, Sinclair Lewis and George Orwell weren’t attacking capitalism or the ruling class, only fascism and Stalinism. Both It Can’t Happen Here and 1984 are already nostalgic for the “highest stage of capitalism,” the world where you could railroads and modern cities, but where you had not yet been forced to make the choice between socialism or barbarism.

In other words, if there’s no conception of dystopian fiction under capitalism in its early, progressive phase, then there’s no need or use for dystopian fiction under the late capitalism that produces fascism and Stalinism. Perhaps that’s why I’ve always found Phillip K. Dick’s The Man in the High Castle somewhat underwhelming. While it is true that the New Deal had given democratic capitalism a thirty-five-year long stay of execution, and Dick expressed some of the anxiety people must have felt over the way Hitler had come so close to world domination, it all just seems a little beside the point. How could any dystopian novel compete with the Nazi death camps? What short story could compete with the headlines under Donald Trump? Why Amazon decided to produce a mini-series based on The Man in the High Castle is anybody’s guess, but it caused nowhere near the outrage that HBO’s proposed Confederate, which is set in an alternative timeline where the south wins the Civil War, is currently generating on social media.

I suppose that some of the anger on the left over a proposed dystopia where the Confederates win the Civil War comes from the idea that one man’s dystopia is another man’s utopia. Let’s call it The Clockwork Orange effect. Clockwork Orange, a novel by Anthony Burgess, and more importantly, a film by Stanley Kubrick, both celebrate fascism under the cover of dystopian fiction. Kubrick barely even tries to hide his love for Alex and his Droogs. Confederate, many people on the left seem to fear, far from being a condemnation of totalitarianism in the tradition of 1984, will simply be Game of Thrones style torture porn marketed to Donald Trump’s America. The one thing you can say about Orwell, I guess, is that he was never the “true poet,” a man, like John Milton who was of the devil’s party without knowing it. Has any reader of 1984 ever admired O’Brien or Big Brother? As far as the left and Confederate go, I’m not quite so confident. Social media liberals love Game of Thrones. Perhaps some of the left’s need to make sure that Daniel Benioff and D.B. Weiss never get the chance to bring their alternative history to your TV comes from anxiety over how they themselves might sympathize with the oppressor as much as any conservative would. Many “white allies” who support the boycott of Confederate aren’t really quite so anti-racist as they think they are. Perhaps deep down inside they’re afraid that people who currently go to Black Lives Matter marches might tune into HBO every week and come away singing Dixie.