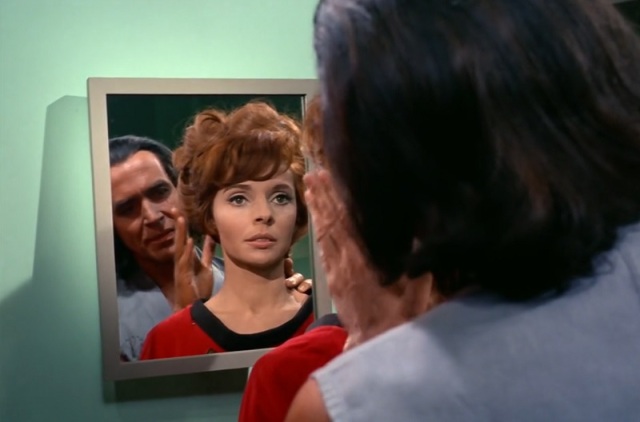 While people sometimes remark that the first interracial kiss on American television took place between William Shatner as Captain James Kirk and Michelle Nichols as Lieutenant Uhura on November 22, 1968, it’s not even the first interracial kiss on Star Trek. Whether or not Ricardo Montalbán would have been considered “white” in 1967 — and he probably would have since he had a long career in Hollywood as a “Latin Lover” unaffected by California’s anti-miscegenation laws — is beside the point. His character in the classic Season 1 episode Space Seed, the genetically modified superman Khan Noonien Singh, is certainly a man of color. More than that, he does more than kiss Lieutenant Marla McGivers, a “ship’s historian” played by Madlyn Rhue. It’s clear that before they lead a mutiny against Captain Kirk and briefly take over the Enterprise, they fuck each other’s brains out.

Nevertheless Space Seed is not socially progressive. In fact, it’s probably the most reactionary episode in the whole series. “Every woman adores a Fascist,” Sylvia Plath remarked in her poem Daddy, and Marla McGivers is no exception. After Khan Noonien Singh, a Twentieth Century fascist dictator with the seductive powers of an Adolf Hitler, wakes up from his two hundred year hibernation, he quickly begins to plot his coup. Like all fascists, he takes advantage of the openness of a liberal democratic society. Kirk gives him access to the ship’s technical manuals without thinking and welcomes him as a guest, not as a potentially dangerous criminal. Yet the key to Khan’s takeover of the Enterprise, the weakest link in the utopian society of Federation of Planets, is Marla McGivers, the silly woman with a soft spot for the “bad boy.” Mr. Spock, by contrast, the unemotional intellectual, is the only member of the Enterprise’s crew completely unaffected by Khan’s “charm.”

The idea that women, and womanly sexual desire, are the key to understanding fascism, is, of course, nonsense. There were no women involved in Hitler’s takeover of Germany or Mussolini’s takeover of Italy, and Franco was a very traditional, patriarchal Catholic. Gene Roddenberry was simply an MRA decades before his time, the male geek who feared that the abusive jocks were getting all the girls. Nevertheless, the decision to cast the Latin Montalbán as the fascist Don Juan instead of a blond, blue eyed Aryan, as the shows producers had originally intended, was a stroke of genius. Space Seed expresses a very real anxiety many white liberals felt during the 1960s. Until William Shatner’s stunt double beats the crap out of Ricardo Montalbán’s stunt double at the very end of the episode, the usually dominant Kirk, a liberal alpha male in the style of John F. Kennedy, simply fades into the background. He seems dull, insignificant, “inferior” as Khan remarks. He doesn’t get the girl as he does in so many other episodes. He doesn’t even come close.

1967 was the very height of the counterculture, the year that the liberalism of the early 1960s was giving way to the radicalism of the late 1960s. Khan’s character is a tyrant who physically abuses his lover Marla McGivers, and uses torture against Kirk and Lieutenant Uhura, but I don’t think the screenwriters Gene L. Coon and Carey Wilbur are afraid of another Hitler. The source of their anxiety is the rising third world, the idea that people of color might not be inferior but superior to white men, and that white liberals in the form of James T. Kirk might simply become irrelevant. The fear underlying Space Seed was not so much a fear of tyranny, but, rather, the fear of a brown planet.

Ricardo Montalbán would return in the The Wrath of Khan. Though it’s usually considered the best of the Star Trek movies, The Wrath of Khan loses all of the political nuance and sexual politics of Space Seed. Montalbán is no longer a sexually menacing South Asian, but, rather, a white haired maniac in command of a crew that looks like they had just been pulled off their surfboards on a beach in Southern California. Marla McGivers is nowhere to be seen. She’s been replaced by Kirstie Alley as a young female vulcan and Bibi Besch as Kirk’s ex lover Carol Marcus, a scientist who surely would have found the original, bronzed, black haired Khan ridiculous.Women in 1982 were a lot more liberated than they were in 1967, and that’s a good thing, but it doesn’t necessarily make for better science fiction.