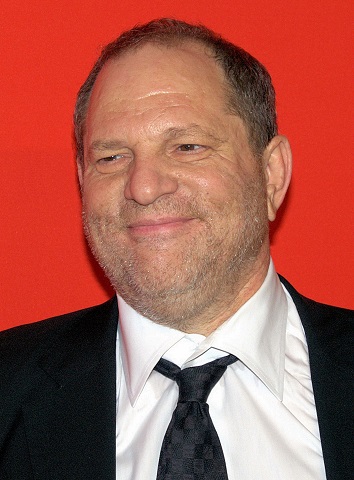 That Harvey Weinstein is a sexual harasser as well as a fat, gross pig — think Chris Christie as the head of a Hollywood studio waiving his dick at any available young woman — has always been Hollywood’s worst kept secret. Until Ronan Farrow published a series of interviews with his victims, however, it was hard to imagine the scope, or the outright criminality, of Weinstein’s reign of misogynistic terror at Miramax Film and The Weinstein Company. As actress after actress after actress after actress came out with her own tale of being “Weinsteined” a pattern began to emerge. This was not catcalling or unwanted propositions, or even a “hostile work environment.” This was an elaborate criminal conspiracy that arranged for the short-term kidnapping and rape of young actresses, and the subsequent coverup in the media and legal system. Conservatives, if you’re looking for the real “pizza gate,” it’s right here.

So what is Harvey Weinstein to me? Aside from being a clueless man who probably hasn’t listened closely enough to women when they talk about the issues that the Weinstein affair has raised, not much. Yet, on this blog, I have hundreds of film reviews, which I wrote, not because I’m a specialist in film or Hollywood gossip, but simply because, as a fairly serious photographer and a failed fiction writer, I’ve always loved images and narrative. I thought that, perhaps, I could some contribution to steering people from the latest superhero reboot to the Pre-Code Hollywood Hollywood or the French New Wave. It turns out that I’m an even worst film critic than I’ve always suspected, and should probably just delete this blog and everything on it.

The conditions that female actors work under in Hollywood are so bad — I’d chose being an undocumented immigrant landscaper over being an A-List Hollywood starlet any day — that it’s impossible for them not to have affected the aesthetics of the films themselves. Harvey Weinstein and Miramax produced some of the most acclaimed films of the 1990s, but if you look more closely, you realize most mainstream American films have a dreary, mediocre quality that, as a younger, angrier, most emotionally honest man I always recognized. It goes beyond Weinstein. As a teenager I saw Roman Polanski’s Tess, and while I could appreciate the film’s gorgeous photography, I was always vaguely creeped out by Nastassia Kinski’s zombie like performance. How could I have realized at the time that she had been sexually exploited from a very young age? Had I wanted to make a real contribution to film criticism I could have concentrated on reading that buried code in American cinema, to tracing the outlines of the criminal conspiracy hiding in plain sight. Instead, I always tried to find something I liked about any film I reviewed. “Why write about something you hate?” I would sometimes think.

That’s exactly what I should have been doing. American film?  I should have been working, in some small way, to destroy it. How could an industry that subjects women to the kind of working conditions I’ve read about in the past few days produce anything but filth?