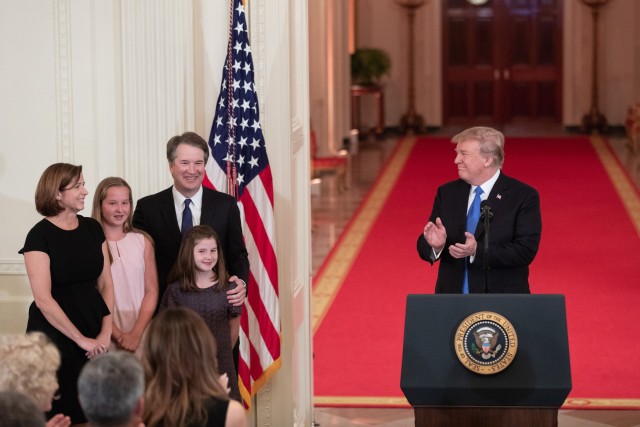 One unforeseen consequence of Trump’s nominee for the Supreme Court is that my generation – Brett Kavanaugh and I are exactly the same age – is in the media for the first time since the early 1990s, and not in a good way. I recognize everything about this hideous reactionary, this drunken, date rapist frat boy, this glowering, entitled, whiny, middle-aged crybaby, from my youth. For every one Kurt Cobain, Generation X produced 1000 Brett Kavanaughs. At Rutgers, where I spent four unhappy years in the 1980s, they were the popular kids who dated all the prettiest girls. Back then, in my naive, petty bourgeois suburban snobbery, I had convinced myself that things were probably different in the Ivy League, that somewhere, in some elite university, some idealistic young man and woman were sitting under a tree reading Dante in the original Italian, or chatting about Arthur Rimbaud in perfect French, but boy was I wrong. Apparently it was even worse at Yale than it was at the State University of New Jersey.

That those pretty college girls, now matronly 50-year-olds, I so envied of those loutish frat jocks are finally speaking out, at long last rebelling against the grim social and sexual conservatism that came down so hard in the 1980s after the student radicalism of the 1960s and 1970s, leaves me with mixed feelings. I finally recognize that all those standoffish preppy women who seemed to be so enthusiastically participating in a social scene which left me, a poorly socialized misfit, and unlike Brett Kavanaugh, an actual virgin well into my 20s, weren’t having as much fun as I though they were. They were coerced, bullied, afraid, unable to come to terms with university rape culture until decades later. I also wonder why they waited so long. Why did so many people let the Brett Kavanaughs, the George W. Bushes, the Chris Christies and the Donald Trumps of the world end up running the country, and why is it always, only about sex? Why is it that just about the only thing that can bring a powerful man down these days is the revelation that he violated an upper-class white woman? Even before we found out that Brett Kavanaugh raped Christine Blasey Ford in high school – and yeah, he did it – we knew he had already helped Jeb Bush disenfranchise black voters in 2000 and Alberto Gonzalez write the torture memos. Why hadn’t that disqualified him?

In the end, I suppose, I’m not as different from Brett Kavanaugh as I like to think I am. If I believe Christine Blasey Ford, and I certainly do, it’s not so much that I feel much empathy for pain and humiliation she’s been put through for revealing a crime committed against her in 1982, and which will probably go unpunished, but simply because I still hate the popular frat crowd I knew in college. It gives me pleasure, maybe an unseemly amount of pleasure, to see just how corrupt the best and the brightest of my generation have turned out to be. Here I am, a miserable, underemployed loser working a shit job, and living in my parents dilapidated, worthless old house, my only inheritance, getting to look down on a nominee to the United States Supreme Court. It feels good sometimes to be able to hate, which, at this point, might just be the only genuine emotion I have left. If the romantic experience of the now well into middle age Generation X can be summed up in two words, “date rape,” then perhaps I didn’t miss very much.