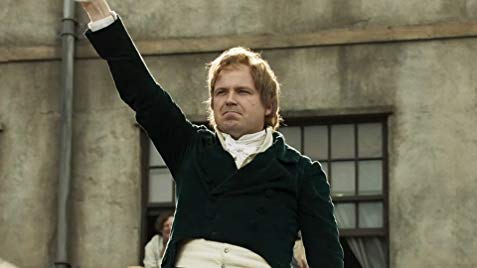 Rise like Lions after slumber
(but not with this pompous cunt)
In unvanquishable number,
Shake your chains to earth like dew
Which in sleep had fallen on you —
Ye are many — they are few.

Try to imagine, for a moment, that the March on Washington ended, not with Martin Luther King’s I Have a Dream speech, but with the Klan, supported by heavily armed federal troops, riding through the crowd in front of the Lincoln Memorial, killing babies, stabbing women in the belly, murdering US Army veterans. These days, at least in New York or Washington, mass marches are mundane affairs. You might get hassled by some right wing bikers. Someone will, inevitably, yell out “get a job,” but for the most part the ruling class simply ignores them. They aren’t much of a threat. Just before the invasion of Iraq in 2003, there were marches of a half million people in the streets of most major American cities. They had no effect. The corporate media barely covered them.

In 1819, in the North of England, on the other hand, a mass gathering of working class people, none of whom could vote, scared the living daylights out of their “betters.” The French Revolution, after all, was barely 25 years in the past. Every English country gentleman could imagine his beaten down workers and peasants setting up a guillotine in the town square. Only five before, Napoleon and the Grande Armee were rampaging through Europe, a man and an army, while not exactly representative of the French, or any country’s working class — Bonapartism was above all the ideology of the rising bourgeoisie — but a deadly threat to moldy old aristocracies. Napoleon not only had a lot of brothers, sisters, nieces and nephews he wanted to make crowned heads of various European nations, he also had a bad habit or ripping down hereditary elites and replacing them with elites made up of talent and brains. Perhaps there was also a bit of guilt. Perhaps, deep down inside, the typical English country squire knew that he was a piece of shit who lived off the blood of the English people and deserved little more than to have his head fall into a basket in front of some howling Jacobin mob.

The 70 or 80 thousand people, and those numbers probably aren’t exaggerated, who gathered at St Peter’s Square in Manchester in the industrial north of England did not consider themselves a Jacobin mob. Just the opposite. They were good Protestants, moral, non-violent. They were patriots loyal to King and country,  who gave their sons to the British Army that defeated the French at Waterloo in 1815, who were demanding their God given rights as English men and women. What’s more, their demands were perfectly reasonable. They wanted the vote. They wanted a representative in Parliament. They wanted a say in whether or not the crown continued to put a tariff on the importation of grain, the “Corn Laws” that benefitted British landowners but made the people go hungry. They wanted that thing the current American government claims it has to go overseas and invade foreign countries to bring to their oppressed masses. They wanted democracy.

Needless to say, they didn’t get it. Technically the United Kingdom still isn’t a democracy or even a republic but a constitutional monarchy. Let that sink in. Two hundred years ago, the landed gentry of the north of England, supported by the army and the crown, road through a crowd of non-violent protesters slashing and clubbing and shooting innocent men women and children, and utterly demolished the first genuine mass democratic movement in the history of England. It was a great victory not only for the British ruling class, but for the European and American ruling class. All the English working class had left when it was all over was the moral high ground, and, even though they had some of the most eloquent voices in the English language take up their cause, most famously Percy Shelley in his great poem the Mask of Anarchy, it got them nothing. 1819 was the moment when the English could have joined the United States and France and reinvigorated the movement for democracy in the west, and it was lost. Everything that followed, the genocide in Ireland, the conquest of India, the triumph of the global north over the global south, was made possible by what happened on August 16th, 1819 at St. Peters Square in Manchester. It’s not a date to celebrate, but an event that should be mourned.

So why would Mike Leigh, the renowned leftist filmmaker, make a movie about the Peterloo Massacre and not, for example, about the storming of the Bastille? Indeed, as wonderfully crafted, and as historically accurate as it may be, Peterloo has not only been a dud at the box office, at least in the United States, a lot of very good film critics have argued that it’s simply a bad movie. Eileen Jones, for example,  can’t quite bring herself to come out and say, “well it sucks.” In the age of bad reboots and crappy superhero movies, you really have to give any honest confrontation with history the benefit of the doubt. There are precious few Mike Leighs and Ken Loaches in the world of film these days. But she clearly hated it enough to give its harshest critics prominent space in her review.

San Francisco Chronicle reviewer G. Allen Johnson goes right for the jugular in a piece entitled “History Rendered Motionless by Mike Leigh in Peterloo”: “So much talking, with every actor bellowing lines from Leigh’s script. So much scenery chewed, so little action.”

I think she misses the point. If Mike Leigh makes little or not mention of Shelley’s famous poem that’s because he’s not trying to make an inspirational movie, but a sobering one. To feature The Mask of Anarchy prominently would be to make the same mistake all of those scenery chewing British radicals did back in 1819. Bismarck once remarked that “the great questions of the day will not be settled by means of speeches and majority decisions but by iron and blood.” Bismarck was a reactionary, not a democrat, but Mike Leigh is essentially making the same point. Democracy isn’t won by high flown speeches, ostentatious non-violence, or winning the moral high ground, but by howling Jacobin mobs and revolutionary peoples armies. In the climax of last year’s film by Raul Peck The Young Karl Marx, which could almost serve as a companion piece to Peterloo, Frederick Engels confronts the leadership of a movement very much like the men, and women, who organized the demonstration at St. Peter’s square, the only difference being that the same people in 1848 were calling themselves “anarchists” not democrats. “Are all men brothers?” he asks. “The capitalists and the workers? Are they brothers? No. They are not. They are enemies.”

If there’s a real villain in Peterloo, it’s not the reactionary judges and ruling class courts – and bless Mike Leigh for portraying the capitalist judicial system as exactly the one sided mechanism of class oppression that it’s always been – the grotesque, decadent Prince Regent, the incompetent British general who abandons his command to go to a horse race, or even the frothing at the mouth reactionary landed gentry who kill innocent working class women and children with such glee, but the radical democrat Henry Hunt. Because of his arrest and long jail term after the Peterloo Massacre, Hunt has gone down in history as a hero of British democracy, and, to be fair, it’s hard to knock a man who gets dragged off the stage of a mass rally by the police and thrown in a dungeon for two years, but if there’s anybody who doesn’t deserve the moral capital he gets from an unjust arrest, it’s Mike Leigh’s Henry Hunt. Played by the excellent Rory Kinnear, Hunt is not only a snob and a pompous windbag, a celebrity leftist who actually despises the working class he claims to be speaking for, he’s a more effective enemy of the working class than three regiments of the King’s infantry. When informed by the leadership of the Manchester democratic radical that the gentry were in fact planning a violent attack on the demonstration and that the people should arm themselves at least with clubs and rocks, he self-righteously declares that at the least sign of militant resistance, he would pack his bags, and go back home to London.

Good, the people who did the real work of organizing the march should have said, go back to London and never come back you arrogant cunt. But the problem is that intellectually they aren’t much different from Hunt himself. Their democratic radicalism is moral, not realistic, idealistic, not class based. What’s more, they are in awe of Hunt’s wealth, style and education, his ability to give a good speech. So they give in to his foolish demand that the people should unilaterally disarm, and the rest is, as they say, history. As the British Prime Minister Harold Wilson once argued, “The whole history of the British labor movement is intertwined with Christianity, far more indebted to Methodism than to Marx.” And that, Peterloo argues, is the problem.