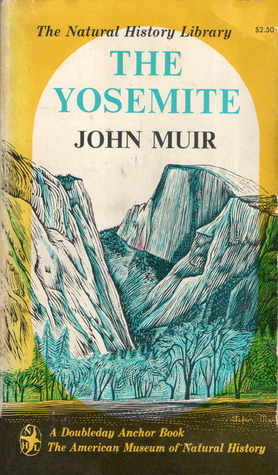 The Yosemite  is a late work by the Scottish American environmentalist John Muir. Published two years before his death in 1912, it is a celebration of the act signed into law 22-years-earlier protecting the now iconic valley from capitalist development. Thanks to men like Galen Clark and John Muir, the Yosemite Valley will never see superhighways or mixed use condos.

Muir, who’s a romantic poet and natural scientist, in equal measure, is also a great literary stylist, a first rate landscape painter in words. Decades before Ansel Adams brought his 8 x 10 view camera to Half Dome, Americans who had never been west of the Mississippi could get a pretty good idea what the Sierra Nevada, the “range of light” looked like.

Reading The Yosemite is a bit like walking though the Met or the Louvre. It’s a bit too much to take in all in one visit, but, as Muir describes each type of tree that grows in the Yosemite Valley, you vow to study it in more detail the next time you visit the museum. There’s so much beauty, so lovingly preserved, it’s all a bit overwhelming. You also realize the horrifying truth.

Yosemite is a museum. It’s a dead bit of wilderness, looted from its rightful inhabitants like a painting Napoleon’s Grande Armée brought back to Paris from Italy, a portrait of a beautiful aristocrat the capitalist pig Henry Clay Frick bought cheap from impoverished Europeans and stuck inside his mansion on 5th Avenue. If 5 million people visited Yosemite in 2016, it’s not because the great national park holds any promise for the future, but because it provides a glimpse of the past that we have lost forever. America is not Yosemite. It is central New Jersey.

As much of a genius as John Muir was, he a fatal mistake. He assumed that if something was beautiful, Americans would preserve it. Muir, like any romantic poet, assumed that beauty was not only truth, it was life. He never understood that American civilization is basically a death cult. It never quite occurred to him that when Americans see something beautiful they can’t  exploit or possess, their first urge isn’t to protect it, but to destroy it.

But there was no excuse for Muir’s failure to understand America as a death cult. The evidence was right there in the Yosemite Valley, right in front of his eyes, in the form of those native Americans he was partly responsible for expelling. Muir would later change his views. In The Yosemite, a late work, he writes eloquently from the Native American point of view. After 100 pages vividly portraying the valley as the most beautiful place on earth, he quotes a Native American chief, a man anguished that he and his people were about to be “relocated” –ethnically cleansed — to some hellhole in Oklahoma or Nebraska.

“Kill me, Sir Captain, yes, kill me as you killed my son, as you would kill my people if they were to come to you. You would kill all my tribe if you had the power. Yes, Sir America, you can now tell your warriors to kill the old chief. You have made my life dark with sorrow. You killed the child of my heart. Why not kill the father? But wait a little and when I am dead I will call my people to come and they shall hear me in their sleep and come to avenge the death of their chief and his son. Yes, Sir America, my spirit will make trouble for you and your people, as you have made trouble to me and my people. With the wizards I will follow the white people and make them fear me. You may kill me, Sir Captain, but you shall not live in peace. I will follow in your footsteps. I will not leave my home, but be with the spirits among the rocks, the waterfalls, in the rivers and in the winds; wherever you go I will be with you. You will not see me but you will fear the spirit of the old chief and grow cold.

To his credit, John Muir makes the anguish of the Native American chief over the death of his son, and over the idea that he will never again see Yosemite Valley, come alive. But I think what Muir failed to understand was that any successful campaign to preserve Yosemite, and his beloved Hetch Hetchy, which was eventually lost to development, had to include a campaign for the rights of the Native Americans, who had lived there for centuries, and had, effectively, preserved it for centuries. Muir sees the plight of the Native Americans in Yosemite as a sad, but isolated, local issue, one that simply wasn’t as important as the establishment of Yosemite as a National Park. So Yosemite lives on, but only as a place we go to visit, not as the world we live in every day.

1 thought on “The Yosemite (1912): The Beautiful Landscape of Genocide”