The Watchung Mountains on a Brompton 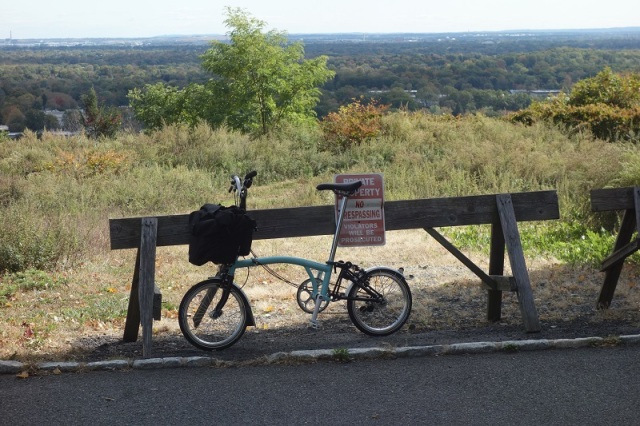 Nobody would ever mistake the Watchung  Mountains for the Alps or the Himalayas. Nevertheless, they were an obstacle formidable enough in 1781 to guard the Continental Army against the British, who were defeated in the decisive Battle of Springfield when they tried to march on George Washington’s headquarters in Morristown. At almost 1000 feet at their height, they are a nightmare to drive over when the road is covered with ice in the Winter. They are a challenge to ride over on a full sized, 700c road bike. So what is it like riding through the Watchung Mountains on a folding bicycle?

It’s actually much easier than I thought it would be.

Last year, I purchased a Brompton folding bike for the not inconsiderable sum of $1525. It’s by far the most I’ve ever spent for a bike, but that finely designed, hand made British engineering doesn’t come cheap. Spending less on a folding bicycle is not only dangerous but a waste. You’d wind up spending more on repairs anyway. I wouldn’t spend any more than $1525. The more expensive models are pretty much just the base model with a nicer paint job, but $1525 is the folding bike’s equivalent of a $1000 dollar entry level aluminum road bike. In fact, since you get an internally geared hub, it’s probably a bargain. You don’t have to worry about your derailleur getting all gunked up with salt in the Winter.

The Brompton has 16 inch wheels. It’s a bit tricky to fold at first, but you get used to it soon enough, and the base model fits anybody from 4’10” to 5’10”. Technically if you’re over 5’10” you need to buy an extended seat post, but at 5’11” I found that the base seat post fits me just fine, so why spend the money or add the extra weight. The front rack and touring bag are excellent. Unlike a normal touring bike, which locates the extra weight in the back, this distributes it to the front wheel, away from your body weight. The Brompton has 6 gears, ranging from a very forgiving 64mm to a much faster 98mm for going downhill. You can get the gearing adjusted down 18% for steeper hills but I found I didn’t need that either. 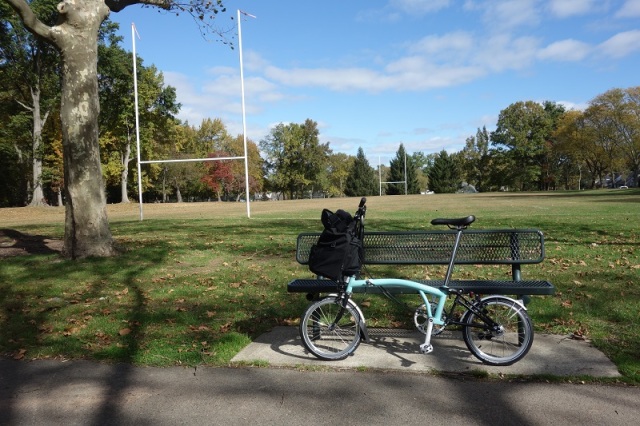 I started off in Unami Park in Cranford, about 3 miles from the entrance to the Watchung Reservation. It’s a pleasant little park set in the middle of gentrified working class suburbia (those little 3 bedroom bungalows built out of the Sears Catalogue now go for $500,000 dollars, but that’s another blog post). I dodged the various Labradoodles, Golden Retrievers and German Shepherds out in the park and road through downtown Westfield and across Route 22. I noticed that there’s a deer hunt going on. Hey, if you’re in the area of Mountainside or Berkeley Heights, New Jersey and own a bow and arrows, here’s your chance. 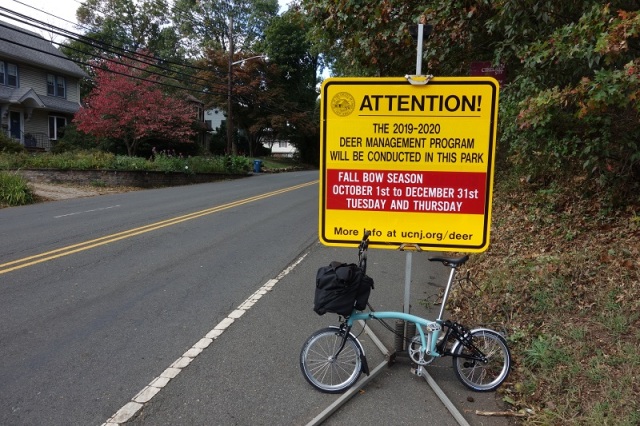 In any event, the steep hills began just at about this point, and I downshifted into first gear. I began to mentally prepare myself to swallow my pride just in case I’d have to get off and walk. Then I shifted back up into second gear. The approach to the Watchung Mountains, while steep, wasn’t as bad as I thought. I could save the first gear for later. The biggest challenge riding a folding bike with 16-inch wheels isn’t so much the steep hills, but the amount of debris on the road. There was a major rain storm a few days ago, and the road is littered with twigs, acorns and even larger branches that haven’t been cleaned up yet. There’s also the traffic. Not only do drivers seem more openly hostile on a Brompton, as compared to a full size bike, you can’t accelerate quite as fast. On the other hand, my guess is that drivers are just as hostile to cyclists on full-sized bikes, and if you’re noticing their hostility, it means they’re noticing you, which is always good.

Once I hit the serious incline of WR Tracy Road, the hostility ended. Motorists making their way up the 800 foot incline not only seemed to recognize that they need to share a big park like Watchung Reservation with cyclists, but also curious about this man riding a bike with wheels half the size of a normal bike. Cyclists on the way down the hill gave me the thumbs up. A fox and a herd of deer rushed across the street ahead of me across the road. I finally shifted down into first gear. I suddenly regretted eating so much before I left the house, but that was a minor issue. I’m also sick — I have a mild case of bronchitis, a cold, and a toothache — and chronically sleep deprived. I began to sweat. I didn’t really need the Carhartt hoodie the way I did in yesterday’s wind storm. But nothing was decisive. I made it to the top with barely any more effort than I take on my full sized road bike.

I also got a good look at the NYC skyline. If Sarah Palin could see Russia from her house. I can see the Freedom Tower at the midpoint of my normal bike ride. 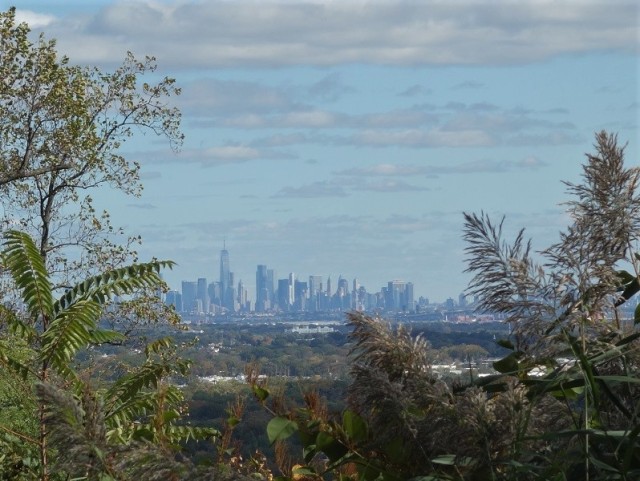 I tried to get the Brompton and the Freedom Tower in the same frame but there was too much brush and too many trees. I also road around the (very wealthy neighborhood) to find the right angle. I walked up on a few porches and road up into a few driveways but none of them let me get the perfect shot. I suppose I made the footage on a few security cameras. “Who is this weird looking guy with this weird looking little bike.” 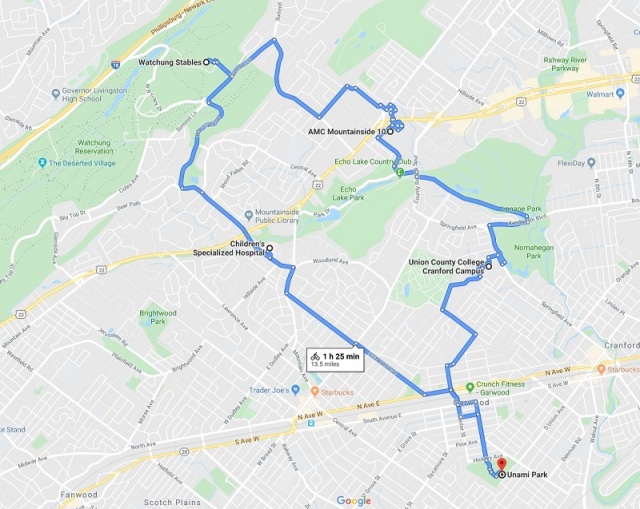 In any event, the final mileage was about 15 steep miles and it was all pretty easy. If you live in a city like San Francisco or Seattle, a place that has a lot of hills, you can manage it easily on a folding bike. The Brompton is also the perfect bike for touring. Just throw it in the baggage check of a Greyhound or an Amtrak and take public transportation in between rides. It’s not as much fun riding a Brompton as it is riding a full sized 700c road bike with drop bars and clip in pedals, but there’s nothing really stopping you using it as your main or only bike.

← The Yosemite (1912): The Beautiful Landscape of Genocide
Bernie Sanders in Queens →