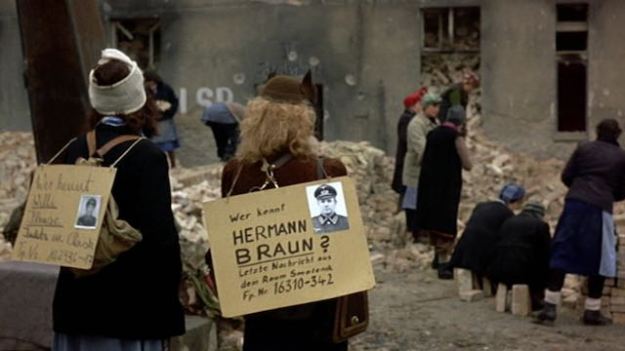 Rainer Werner Fassbinder’s 1978 film The Marriage of Maria Braun has a plot that, if not exactly a cliche, has long been part of the vocabulary of American and European film and literature. A hot young piece of ass, think Scarlett O’Hara in Gone with the Wind or Barbara Stanwyck’s Lily Powers in the Pre-Code Baby Face, uses her sex appeal to climb out of poverty to great wealth and power. To call her a “prostitute” or a “sex-worker,” however, would be a mistake. She is more like a “sex capitalist,” or a “sex entrepreneur,” a hard-headed businessman who just happens to be a beautiful woman. In many ways, it is the ideal of the liberated woman under capitalism. Sell yourself, but don’t sell yourself cheap.

What makes Fassbinder’s film still worth watching is not only the brilliant camerawork, or the performance of Hanna Schygulla, a tougher, more vital actress than Vivien Leigh and fully the equal of the young Barbara Stanwyck, but the way Fassbinder locates the story in the historically particular setting of the Federal Republic of Germany. In the 1930s, the part of Maria would have been perfect for Marlene Dietrich, the Teutonic Stanwyck, but in 1978 Germany no longer existed. In the east, the Stalinist German Democratic Republic operated under a cloak of secrecy, both western and communist. In the west was the very peculiar Federal Republic of Germany, a far-right wing state set up by Wall Street and the CIA that, boosted by debt forgiveness and Marshall Plan Aid in the days when the American ruling class was far more generous and far more intelligent, was well on the way to becoming one of the wealthiest countries in the world.

The film opens with the marriage of Maria Braun. Maria and Hermann, Klaus Löwitsch, are attempting to tie the knot outside, in the middle of an American bombing. After a bomb hits, and the smoke clears, we see them both, immobile, lying on the ground. Are they dead? We cut to Maria, a few years later, very much alive, living in a bombed out building with her mother. The American occupiers are more obtuse than oppressive, but the times are still desperate. When an American soldier throws a cigarette butt on the ground, a dozen men scramble to pick it up, getting into a brawl for one drag of that precious nicotine. Later, after a group of American soldiers catcall Maria, and she fearlessly walks up to them and declares “you may have the power to say what you just said but you don’t have the right to say it,” one of them apologizes by giving her a package of cigarettes. Now possessing cigarettes, suddenly popular, a light bulb goes off over Maria’s head. Men, and by extension, society as a whole, can easily be conquered by a show of force combined with the right kind sex appeal.

Believing her husband dead, Maria then gets hired at a cafe where German women entertain American soldiers. That German men aren’t allowed inside, and that the great majority of the American soldiers are black, is a testament to Fassbinder’s genius. The club is the mirror image of places back in the United States like The Cotton Club, segregated venues where black musicians entertained white guests, and blacks weren’t permitted as paying customers. Maria begins an affair with Billy, a rather likeable African American soldier more infatuated with Maria than she is with him, but possessing one valuable commodity. He’s willing to teach her English. Eventually Maria becomes both fluent in English and pregnant. The sex scenes are so open and matter of fact, the interracial angle so daring, that I doubt an American director, even in 2019, would be able to film anything like it without a massive backlash, both from the racist far right and the politically correct far left. It would never pass the focus group testing at a Hollywood studio. The far right, of course, would object, not only to the idea that a blond, blue-eyed Aryan would casually sleep with an African American, but that the majority of American soldiers in occupied West Germany seem to be black. The far left would object to what comes next. After Maria’s husband Hermann returns from a Russian prisoner of war camp, unexpectedly showing up right in the middle of their lovemaking, she hits him over the head with a bottle and accidentally kills him. Shortly afterwards, she loses their child in a miscarriage and gets over perhaps a bit too easily. The interracial child would be a bit too inconvenient in the racist Federal Republic of Germany. Was it actually an abortion?

Touched by Maria’s earnest confession of love, Hermann frames himself for the killing and goes to jail for manslaughter. Maria, like Scarlett O’Hara still pining for the chivalrous Ashleigh Wilkes, but possessing the hard headed instincts of a successful capitalist, then finds her own Rhett Butler, an older French businessman named Karl Oswald who’s returned to Germany to reopen the factories he lost when the Nazis rose to power. The scene where they meet is remarkable. Stuck inside a third class railway car, crowded by the frantic, unruly proletariat, Maria bulls her way into first class, bribes the conductor, and introduces herself to Oswald who, while wealthy, is no Rhett Butler, no domineering lady’s man, but an easily manipulated chump who falls in love with the beautiful Teutonic Scarlett O’Hara at first sight. Maria’s idealistic love for Hermann allows her to be especially ruthless. The more money she can make, the more comfortable she can make his life after he gets out of jail. It’s hard to express just how matter of fact, yet how inspired Fassbinder’s staging of their meeting is. From third class to first class, from being one of a desperate, impoverished mob to being an individual with space, with room to breath and converse, it’s an almost magical expression of just how completely our life changes under capitalism when we get money.

But does it really change. Fassbinder is a master of expressing not only the influence of race and class on our lives under capitalism, but just how much capitalism makes us wait. Maria’s rise to wealth and power is effortless. She’s not selling herself to Oswald. She’s merely using him for sex every once in awhile when she gets the urge. As Marlene Dietrich once remarked, “sex for Americans is an obsession. For Germans it’s just a fact of life.” Fassbinder is incapable of imaging the kind of tabloid melodrama puritanical Americans would attach to the idea of a younger woman sleeping her way to the top. Oh that poor innocent victim! That monster is exploiting her! No. She’s exploiting him. Indeed, in gaining the world, Maria loses her soul. The longer she waits for Hermann to get out of jail, the harsher, and more domineering she becomes. She no longer seems to be able to relate to other people as humans, to get out of the role of “girl boss” she’s so meticulously constructed. By the end of the film, when she finally gets paroled, she almost seems like a Nazi. In some ways, since I don’t speak German, I never quite feel like I’m getting as much out of Fassbinder’s films as I think I should be getting. Fassbinder is a highly verbal filmmaker. Subtitles are never quite enough. But there’s no mistaking the transformation of Maria’s speech from the subtle, flirtatiousness of the early scenes to the harsh way she barks orders in the later scenes, and the German language seems particularly appropriate. Girl Boss has become Girl Fuhrer.

Is the film’s narrative arc sexist? Perhaps. But it’s undeniably historical. In the film’s bitterly ironic final line “Germany wins it all,” Rainer Werner Fassbinder, who died in the early 1980s at the age of 37, predicts the future. Where Bismarck, Kaiser Wilhelm II and Hitler failed, a united Germany under Angela Merkel succeeded. Germany now has the third largest economy in the world after China and the United States. With their junior partners the French, they completely dominates the European Union. But will they ever produce another Goethe, another Mozart, or even another Fassbinder? As rich as they get, my guess is “no.”