So What’s Going on in Iowa? 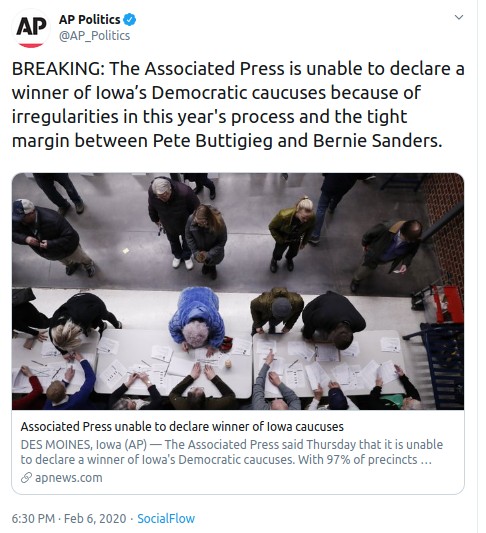 So what’s going on in Iowa?

1.) A week before the Iowa caucus I noticed a coordinated talking point among centrist Democratic pundits and pro-establishment Democratic Party activists that the Iowa caucuses were “too white” and that Iowa should be replaced as the first state to vote in the primaries by Arkansas or South Carolina.

2.) A tech startup with ties to Pete Buttigieg and the Clintons effectively sabotages the Iowa caucuses. The new talking point being put out by centrist Democratic pundits and pro-establishment Democratic Party activists is “see we told you so. This is a problem that’s built into the Iowa caucuses.”

4.) When Bernie’s campaign announced Monday night that they had their own app, the Iowa Democratic Party stopped the counting at 62 percent (with Buttigieg in the lead) and held off releasing any further results.

5.) As the Iowa Democratic Party released more results, Buttigieg’s lead progressively shrunk. At 97%, when it appeared that the satellite caucuses were about to put Bernie over the top, the DNC stepped in and stopped the counting, calling for a recount. And that’s where it stands.

So what to make of all this?

My guess is that the DNC and the Democratic establishment probably realize they can’t stop Bernie. Biden is imploding. Warren isn’t catching on. So what will they do?

I think the plan to throw the election to Trump in November and then front load the 2024 primaries in conservative southern states to make sure that a Bernie Sanders (the new McGovern in their eyes) never gets close to the nomination again. In the meantime, if Buttigieg (or Bloomberg) can damage Sanders before the Democratic National Convention in July, so much the better. If the Sanders campaign fades in the Spring, and the Democratic Party establishment can run a “compromise” candidate like Klobuchar or Bloomberg, they’ll probably try to beat Trump in the Fall.

Is Pete Buttigieg the American Emmanuel Macron (an elite corporate consultant who comes out of nowhere to steal the Presidency after the traditional political parties implode) or is he effectively a stalking horse for Michael Bloomberg?

Only time will tell. I don’t know how many people outside of the NYC area know how bad Michael Bloomberg is. He’s the closest thing to Mussolini (and that includes Trump) in American politics today, a hard core authoritarian who preemptively arrested 2000 people during the Republican National Convention in 2004, smashed Occupy Wall Street, and instituted a reign of terror against young, black and brown New Yorkers during his three terms (the last illegal) as mayor. He’s definitely a long shot. He’s not going to win in the red states with his record on gun control. So it probably means another term of Trump (or Pence if Trump’s corruption finally catches up with him). Get ready to hear a lot more about Russia (and China) over the next few years. I’m going to need a bigger crate of Vodka.

I think there is a legitimate question about whether or not Bernie should run a third party campaign. The Democratic Party establishment clearly intends to sabotage him if he gets the nomination. So perhaps the best strategy for him would be to throw his delegates to Warren at the Democratic Party convention in July to block Bloomberg and accept the Green Party nomination. He certainly has the infrastructure to get on the ballot in all 50 states.