A group of middle aged white men in Franklinville, New Jersey decided to counter protest a black lives matter demonstration by mocking the way George Floyd died, pleading for his life with a cop’s knee slowly strangling him.

There’s nothing particularly new about fans of Donald Trump having a good chuckle at a racist murder. Almost every political demonstration I’ve ever attended has been harassed by a, usually small, gang of right wing assholes intent on telling us how much they love George W. Bush, Donald Trump, or the cops. This fine gentleman, for example, showed up at a Black Lives Matter rally in downtown Manhattan protesting the murder of Eric Garner by the NYPD. 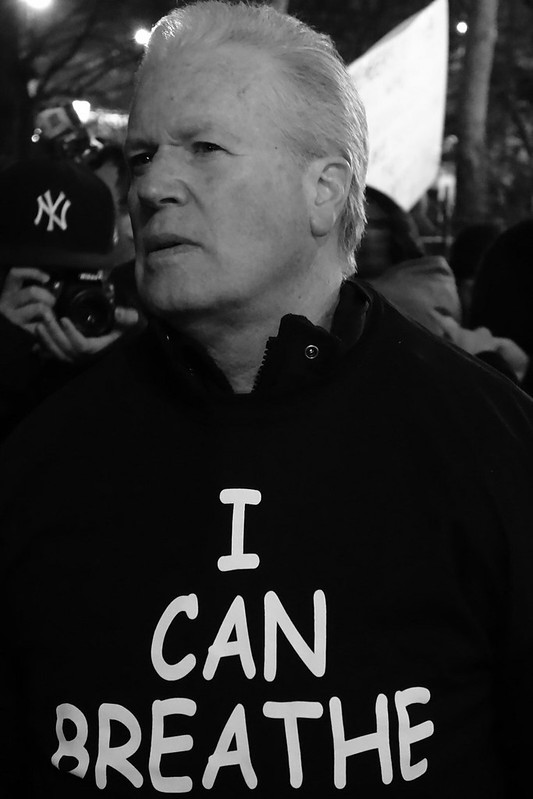 But something has changed. At least one of the racist protesters in Franklinville has been fired from his job at FedEx. The other, a corrections officer (of course) has been suspended pending a review. Where in the Bush years the media would have “objectively” considered the event from “both sides” — usually a few hundred thousand anti-war protesters and a few dozen Bush supporters —  here they’ve been almost universally outraged by the idea of making light of the lynching of a black man by the police. Perhaps, as Jennifer Senior has argued in the New York Times, we have reached a tipping point, not only of the Trump Presidency, but of culture of post 9/11 America as a whole.

For America’s police officers 2020 is the mirror image of 2001. The day after 9/11, everybody decided that the NYPD, only a year away from the murder of Amadou Diallo and the torture of Abner Louima, were heroes. In fact, it wasn’t only the police, but anybody in uniform. In 2003, many people argued that even if you weren’t in favor of invading Iraq you should keep quiet and “support the troops.” The backlash against the 1960s counterculture and the Civil Rights Movement had kicked into high gear. The United States was now collectively sorry about the (completely fictional) accounts of hippies at the airport spitting on returning soldiers and calling them “baby killers” (which of course they were).

In 2016, Donald Trump became President, not because of the Russians, or even because of Hillary Clinton’s incompetence, but because the American far-right had decided that George W. Bush hadn’t gone far enough. Conservatism in the form of Rich Nixon, Ronald Reagan, and both members of the Bush crime family had ended up going soft, turning out to be wishy washy and moderate. So in 2016, they finally got what they wanted, the loudest, most belligerent, vulgar caricature of everybody’s racist uncle anybody could imagine. The American right had finally gotten its blue skies candidate, Barry Goldwater, George Wallace, and Spiro Agnew wrapped up in a bloated, aging reality TV star. The Boomers had finally showed us who they really were. A nation of fascist assholes.

Well not all Boomers. Most Americans aren’t liberal and aren’t conservative. They’re apolitical centrists who care more about their resumes and about getting their kids into Harvard than about whatever corporate puppet currently resides in the White House. In the years following 9/11, many Americans, still guilty about all the sex, drugs, rock and roll, and antiwar radicalism of the 1960s decided that they would give the far right the benefit of the doubt. If their racist uncle went on a long rant about “the blacks” or “the Koreans” they would nod passively and pretend to agree. If their smart ass 20 year old son just back from college decided to argue that “well Uncle Charlie, racism is bad, don’t you think,” he’d quickly be shushed into silence. “One shouldn’t talk about politics or religion at family reunions.”

Surprisingly, in 2020, apolitical centrists no longer seem to be willing to give their racist uncles the benefit of the doubt. They’re no longer willing to silence leftists who refuse to support the troops. They’re no longer willing to ask for “more context” when they see a video proving beyond a shadow of a doubt that the cops murdered an innocent man. All of this, of course, could change before November, but as of now the fascist American reality show  that was born the day after 9/11 seems to have at long last been canceled.