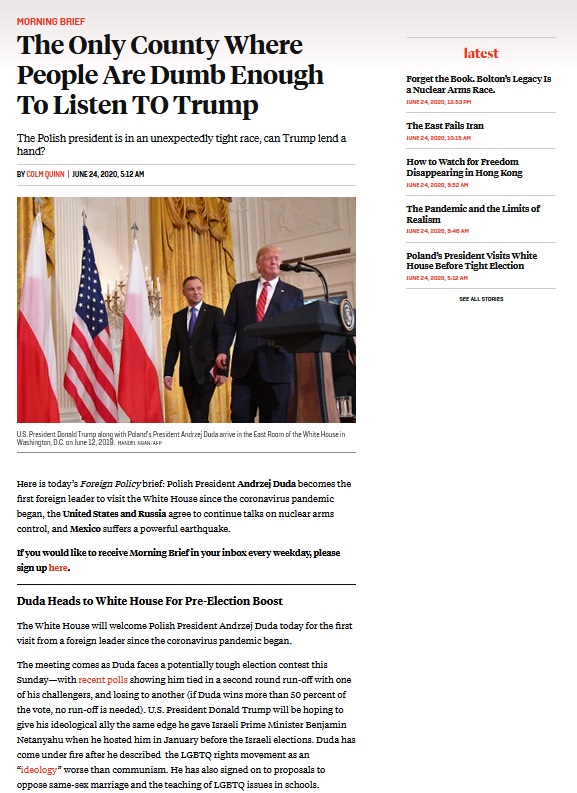 Poland is one of the four dumbest countries on the planet. The United States is another. Here are the other two (shithole countries).

Poland loves the U.S. president. Unlike their neighbors Germany, where a Pew poll showed only 13 percent of citizens have confidence in the U.S. president “to do the right thing in global affairs,” Polish citizens have faith—51 percent of Poles polled trust the president on the global stage. Poles also have a highly favorable opinion of the United States, which at 79 percent was only beaten by the Philippines (80 percent) and Israel (83 percent).

It would be tempting to say that the Israelis are dumber than the Poles, but we all know that’s not the case. The Israelis buy American weapons, but they do it on American money. The Poles are just begging to pay the United States “protection money” under the illusion that the United States military will keep their little homophobic, white supremacist, Islamophobic shithole of a country safe from the big bad Russians.

In March 2018, Poland signed a contract worth nearly $5 billion for the Patriot air and missile defense system.  Poland is also procuring the High Mobility Artillery Rocket System (HIMARS), worth $411 million, which will improve its indirect fire capabilities.  Poland is considering purchasing 32 F-35A Lightning II Joint Strike Fighters plus services and support worth ~$4.5 billion under the Foreign Military Sales (FMS) program overseen by the U.S. Department of State.  This procurement will help Poland replace its fleet of aging MiG-29 and Su-22 aircraft.

From CY 2010 through CY 2018, the U.S. has also authorized the permanent export of over $1.8 billion in defense articles to Poland via the Direct Commercial Sales (DCS) process.  The top categories of DCS to Poland were aircraft ($780 million); electronics ($277 million); and gas turbine engines ($260 million).

Seriously if the current government of Poland were managing a Starbucks they would have taken this deal.

4 thoughts on “A Surprisingly Honest Headline”