Are we really debating the French Revolution in 2020?

So first the loathsome neoconservative Senator Lindsay Graham hilariously compares Jamaal Bowman and Charles Booker to the leaders of the French Revolution. Then some editor at the New York Times, correctly, points out that the French Revolution is the only reason why we have democracy in Europe and North America. Then he immediately gets spammed by thousands of racist, right wing assholes like Mike Cernovich, backs down, and winds up deleting his tweet. 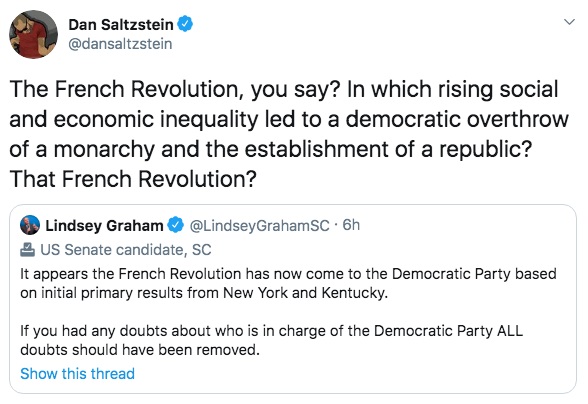 Since I’m not an editor at the New York Times and can’t be “cancelled” for being too left wing, let me come out and say it. The French Revolution was good. The Reign of Terror was good. But don’t take my word for it, Mark Twain, who was good friends with the recently cancelled Ulysses Grant, put it best. Even though France eventually became a military dictatorship under Napoleon — and he was also good — and even though the monarchy was eventually restored in 1816, the Reign of Terror eliminated centuries of institutional poverty put in place by feudalism and the Catholic Church. 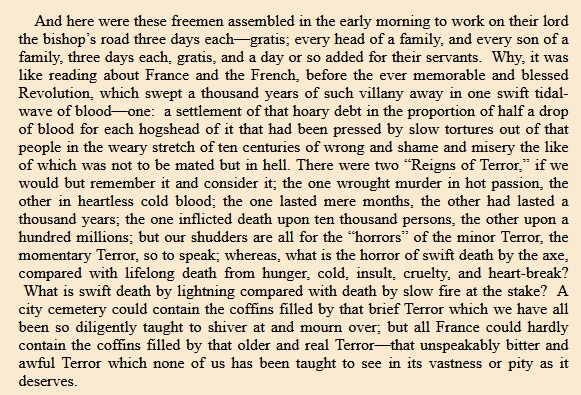 But it gets better. Mike Cernovich, in addition to being a racist piece of shit and a rape apologist, is also a prominent advocate of antisemitic conspiracy theories like Pizzagate. How exactly do you get hired at the New York Times and then proceed to cower in fear of nasty little reactionaries like this? I don’t know. Can you tell I’m angry? Fucking cuck liberals will never, ever stand up for themselves, even when they’re absolutely correct about a historical event that outside of the extreme right isn’t even controversial anymore. If we can’t have a communist revolution, can we at the very least have liberals like Mark Twain and Ulysses Grant, liberals who would have laughed so hard at fascist little toads like Cernovich they would have literally pissed themselves? I suppose not.

But it gets better. As Stephen Eric Bronner points out in his book A Rumor about the Jews: Antisemitism, Conspiracy, and the Protocols of Zion, “scientific racism” and anti-Semitic conspiracy theories, two evil things that absolutely refuse to die and currently live in the white supremacist buffoon in the White House, have their origins in the conservative reaction against the French Revolution. Arthur de Gobineau, for example, who realized that since feudal hierarchies were dead, the European ruling class needed another myth to justify their power over the masses, namely “scientific racism.” So he came up with a crackpot theory that before 1789 the French Aristocracy was made up of racially pure Nordics (Franks and Scandinavians) and that the common people were Celts or Latins.

And the Germans, displaying the blond hair of their ancestors, emerged to rule in every corner of the world. Neptune and his trident serve the Anglo-Saxon, their last descendant, and the peopled deserts of young America know the strength of this heroic people. But as to the Romans, Alemanni, Gauls, […] to put it briefly, those who are not German are created to serve.

American Boomers love to joke about the French surrendering to the Germans. Well here’s where it started. What’s more, anti-Semitic conspiracy theories like Pizzagate and the idea that George Soros controls the American left have similar origins, in the royalist reaction against the French Revolution, in the idea that hundreds of years of feudal oppression had nothing to do with what happened in 1789, that it was all a conspiracy of the “Bavarian Illuminati.”

A French Catholic priest called Augustin Barruel is generally regarded as one of history’s most famous conspiracy theorists. His multi-volume 1797 book, Memoirs Illustrating the History of Jacobinism, about an alleged conspiracy that led to the outbreak of the French Revolution, has been reprinted many times and translated into several languages.

Not long after the publication of his work, Barruel was sent a letter by a man called Jean Baptiste Simonini, who alleged that the Jews were also part of the conspiracy. This letter – the original of which has never been found – continues to shape antisemitic conspiracy thinking to this day.

Yes, although it may have been penned by an agent of Czar Nicholas II, the Protocols of the Elders of Zion can be traced directly back to people who were pissed that Robespierre and Napoleon gave Jews equal citizenship. Oh ye ignorant Americans, for the 10,000 time, the French Revolution was good.