Note: This article refers to “millennials” repeatedly. While the name for any generation is always going to be broad terminology, there are many differing opinions on who exactly is a “millennial.” The following article presumes them to be Americans born between 1982 and 2004, as per the more common definition of “millennial,” but again, this terminology is loose and should not be considered definitive, even within the context of this article.

Second Note: I’m not going to even bother addressing the hypocrisy of many of the criticisms against millennials in this article. There are matters re: millennials that I desired to address, and I think the aforementioned hypocrisy is self-evident (and if it isn’t, give some consideration to the fragile emotional constitution of the Tyler Durden-idolizing man-children who first spread “snowflake” as an insult).

“Forced worship stinks in the nostrils of God.”

A state religion is nothing out of the ordinary in human history, and even if a nation does not have a state religion de jure, they will almost certainly have one in practice. This applies even to supposedly secular societies, even the society administered to by the “world’s first secular government.” In America, however, a different worship took root: in a land made secular in order to accommodate all the religious beliefs of its populace, many of them religious pilgrims, a unified religion came to be understood by Americans, one defined by indulgences specifically proscribed against by their “true” faiths. Golden calves were erected; divinity was invoked to justify imperialist expansion into the western parts of Northern America; Americans worked on Sundays, seeking to satiate the capitalist god they held before their true gods; we coveted our neighbors’ goods. The ’80s came and the Reagan gang took power, and a predisposition in American culture toward crude materialism became a crass classism, and pretensions that the ideology that “anyone can make in America!” was meant to be uplifting were increasingly dropped in favor of a reading of social Darwinism into that same ideology, and beyond that, even mainstream apologism for eugenics.

For a country that prides itself on being so exhaustingly Christian, America’s culture is markedly shaped by a sternly resolute contempt for the poor. And so we face the timeless panic about The Kids These Days, who, to establishment culture’s dismay, are not ones to regularly associate themselves with organized religion, systemically racist institutions, or patriarchal politics, and who by overwhelming margins are rejecting capitalism and professing an admiration for anything ranging from a European-style mix of capitalism and socialism (more common) to full-blown communism (less common, though substantially more common than in prior generations). America watches in horror as the young turn to the writings of Karl Marx, even though America never even understood what Marxism is. The nation shields its eyes, shuddering to watch the carnage of a generation of Americans who believe god is dead or never existed, and simultaneously wagging a finger at them for wanting to help those who cannot help themselves, the central tenant of the belief system laid down by their own god; the very same whose rejection they bemoan. Millennials have rejected not just the mainstream religions from which the god-fearing populace picks and chooses their beliefs, they have, more problematically to the American establishment, also rejected the false gods of consumerism and the accompanying notion of “ethical consumption.”

There are regular articles which trot out polls detailing how millennials are incredibly socialist and really hate capitalism, but also millennials don’t understand what socialism is and also like aspects of capitalism. We get it, man. You want us to think millennials are dopey. They don’t even know what Betamax was; how ignorant! Except your polls don’t offer the option of a mixed system, and typically, when you look at the other generations polled, they know even less about what any of the political systems actually are. So the narrative is that millennials are vapid, ignorant, self-obsessed children in adult bodies, except apparently everybody else is even more vapid and ignorant. If millennials are self-obsessed, our adoption of the baffling insult “social justice warrior” as a golem for our political beliefs is, at the least, a strange way of expressing self-obsession. Millennial-bashers, blind to the juvenoia that they suffer like every generation before them, will look for the opening here and say that the millennial desire to support those who are disregarded is out of a selfish need for self-affirmation, the product of a culture where losers get trophies. Of course, it was these same critics giving those trophies who created that culture (if participation ribbons even had a significant impact on culture at all, which seems dubious), but this paradoxical critique of millennials’ competitiveness has already been hashed out millions if not billions of times on the internet, and at any rate, even if self-affirmation is the objective, if the means to that end are the establishment of a compassionate society, who even gives a fuck?

The last of the so-called “millennials” will cast their first ballots in elections in 2022, and you older generations (and self-hating millennials; don’t worry, we won’t forget you when the guillotine blades are being waxed) are probably praying for a reprieve, but you’re not going to get it. Generation Z, our little brothers and sisters and our sons and daughters and nieces and nephews, are even further left, and they will cut you if you don’t respect which gendered pronouns someone wants to be referred to with. As someone who idled away many a teenage afternoon listening to the likes of George Carlin, Bill Hicks, Chris Rock, etc., I know I’m supposed be all bent out of shape about this for some reason or another, but none of those reasons really resonate with me. I get that people like to be edgy, but there’s two types of edge: the edge that makes you uneasy because the government might try to censor you, or corporations might try to use their leverage against you, and the edge that makes you uneasy because you know what’s being said is harmful to someone. One is punching up, one is punching down. When Lenny Bruce used racial slurs, he was demonstrating the ghastly language that could be used in the presence of police offers in attendance at his comedy shows, ostensibly to put a stop to “profane speech” that might come out of Bruce’s mouth. Bruce could say “nigger” and “kike” all he liked, but the second he used a Yiddish word for cock, the handcuffs came out and flexed the power of what truly was then a “nanny state.” That, state-enforced regulation of speech, is “political correctness run amok.” Society responding as it will to ignorance is not. Millennial culture’s greatest crime is desiring that those with their hands upon the levers of power be punched at as opposed to those crushed by the gears those levers operate. That doesn’t make it wrong to laugh at a joke that punches down; laughter is mainly involuntary, and can be triggered by surprise or the release of tension just as easily as by genuine humor. But is there impetus upon the speaker not to offend?

Jerry Seinfeld moaned that he won’t play colleges anymore because they’re too politically correct. Really? What jokes is Jerry Fucking Seinfeld doing that are going to cause him to be driven off of a college campus like a philistine, and if his act does actually reveal him to be a philistine, why should I object when a bunch of arts and humanities majors, whose money paid for the privilege of him speaking before them, tell him to shut the fuck up? In short, no, there is no impetus upon the speaker not to offend. But there’s also no impetus upon the audience to listen, or not to yell at him or not walk out, or even give him a platform to speak from in the future. Just as there’s no impetus for comedy club owners in multicultural population centers to book a comedian who screams racial slurs and death threats at black patrons. Free market, amirite motherfuckers? 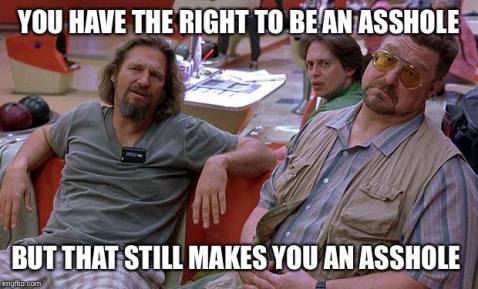 “Dude, ‘Chinaman’ is not the preferred nomenclature. ‘Asian-American,’ please.”

The final primary line of attack against the culture of millennials seems to be that their concerns are petty, and that while this makes them obnoxious, and possibly dangerously inert to the whims of society as a whole, their political capital is wasted on things like the aforementioned gendered pronouns, and they are essentially helpless to impart real change upon the world. This is a highly flawed reading of the situation. To my specific example, having society respect your desire to be referred to as a man or a woman specifically might not seem like a big deal, but if you were transgender, you would probably think that it’s a pretty big fucking deal. The fact that you perceive the group concerned as ancillary suggests that majority rule justifies bigotry against minorities, and forgets that all of the groups that you consider “ancillary” combine to form an incredibly large segment of society. Unconsciously, you reveal an “us or them” division in your social ethos that ultimately only distinguishes in a coherent way the difference between the majority and everyone else. As to the view of millennials being doomed to ineffectuality, the irony is that those holding this opinion are doomed to political and social obsolescence by it. No one can deny that American culture is undergoing an upheaval, and anyone who denies that the so-called “P. C. Culture” of the millennials is one of the two major adversaries is fooling themselves. None of this is to say that millennials are without opposition; there is, of course, the other side, the people who went to Trump rallies (but perhaps not the economically-disenfranchised who didn’t but voted for him). But the fact of the matter is, American culture is seeing a wholesale rejection of its ingrained norms, customs, and mythology, and the “social justice warriors” are one of the two main groups fighting that battle. To consider millennials ineffectual is laughably obtuse, and, perhaps worse, deliberately ignorant. If anything, millennials are the ones who should be cocky, as thirty years from now you will be dead, and they will hold most of the seats in Congress. Burying your head in the sand has never been considered a wise tactic, and certainly, to discount the scope of a major social force dooms those who do so to irrelevancy.

I couldn’t be any happier with that.