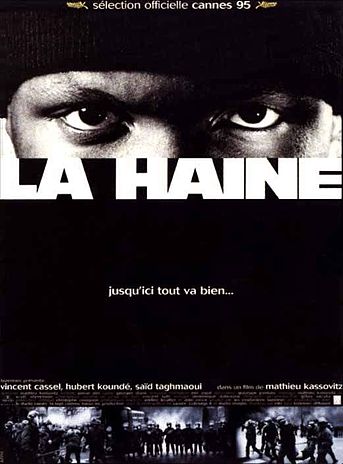 La Haine is such a well-known film in Mathieu Kassovitz’s native Paris that if I were to write this review in French, it would be a bit like writing a review of Reservoir Dogs in English. Oh my God, did anybody see the part where Mr. Blonde cut off the cop’s ear? But, even though it’s one of the best films of the 1990s, La Haine has never really entered the popular consciousness here in the United States the way the smug, tedious Trainspotting, or the quotable, but ultimately hollow Fight Club have. It might just be the language barrier. It might also have something to do with how the United States has a “path to citizenship” for even the most discriminated against immigrant groups. For many Americans, the film needs more than subtitles. It needs extensive notes providing the right historical context.

La Haine is set in one of the notorious immigrant housing projects, or banlieues, that surround Paris. Think Co-op City filled entirely with the children of first and second generation immigrants from the third world, people with no chance of ever getting a good job, or assimilating into the mainstream. As the opening credits roll, we’re shown footage of “riot porn.” We learn that a young man, Abdel Ichaha, was so severely beaten up by the police that it put him into a coma. We also learn that, during the riots, a police officer had lost his 357 Magnum revolver. Three friends, Vinz, a blond, blue-eyed Jew, Hubert, a tall, muscular African boxer and small-time drug-dealer, and Said, an Algerian, three young men in their early 20s who usually spend their days aimlessly “hanging out,” are still aimlessly “hanging out,” but now they’re also fuming and plotting revenge.

Mathieu Kassovitz’s pacing and cinematography feel like the most remarkably “realistic” look at an inner-city “ghetto” that I’ve ever seen put to film. La Haine makes Spike Lee’s Do the Right Thing look cartoonish and Charles Burnett’s Killer of Sheep seem dreary and uninteresting. Vinz, Hubert, and Said are filled with the nervous energy of vital young men. They’re also subjected to police intimidation and harassment that will immediately remind an American of the “Stop and Frisk” policy in Ray Kelly’s and William Bratton’s New York. That harassment and intimidation have been stepped up in the aftermath of the riots. A rooftop that’s always served as an unofficial youth center is shut down. The corporate media cruises the banlieue doing “interviews,” hoping to catch some non-white, non-French immigrant making an inflammatory statement. La Haine has the clear-eyed cynicism about the “news” some Americans only managed to acquire in the wake of the Iraq War, the 2008 financial crisis and the brutal suppression of the Occupy movement, and most wouldn’t comprehend at all. We learn that Vinz has the policeman’s lost revolver.

The quote that opens La Haine telegraph’s the film’s intentions right from the beginning.

There are no spoilers. There will be no happy endings. Vinz, Hubert and Said are doomed. Like Michel Poiccard from Godard’s Breathless, they are not only obsessed with American culture — Vinz poses in front of the mirror like Robert DeNiro in Taxi Driver. Hubert has posters of Muhummad Ali on the walls of his bedroom. — they are living in the final hours of their lives.  What’s remarkable about La Haine is that even though Mathieu Kassovitz tells us exactly what’s going to happen in the first few minutes of the film, he still manages to seduce us into seeing the world from the point of view of the three young men falling off the skyscraper. The fall is not only exhilarating, but inevitable.

Hubert, the boxer, is the the least violent of the three. Hate, he tells Vinz, only leads to hate. Said is younger and more vulnerable, but still volatile. Vinz is a hothead with a 357 Magnum. Each time Vinz or Said drags him into useless, stupid irrational confrontation, we can see things with Hubert’s rational intelligence. Why bother? Why not just walk away? But the only rational choice, for three young men in the banlieues, is to hang their heads and “submit.” The “irrational” choices they wind up making will preserve their self-respect and manhood, and we can see why they act stupidly each time they act stupidly. They go into central Paris to collect on a debt from another drug dealer. Hubert and Said are briefly detained, and tortured, by the police. They miss their train back to the Banlieu and spend all night roaming the street. They trash an art gallery. They hotwire a car before suddenly realizing none of them knows how to drive a manual shift. They get into a fight with a group of racist skinheads. Finally, they go back to the banlieue, and Vinz is killed. The only regret we have is that Vinz didn’t manage to take a skinhead or a cop with him before he meets his violent end.

So why should you watch this grim French, “ghetto” movie?  There’s the technical brilliance, the dynamic camera movements, the way you’re pulled into the exhilirating energy of young manhood. But I think there’s a deeper, and more sobering reason. The United States of 2014 is not the United States of 1995. Back in 1995, the American people still had the illusion that their country belonged to them. Now, who can believe anything so naive? It sometimes feels as if we’re living on the private property of the plutocrats on Wall Street and the military, industrial surveillance state in Washington, as though it were someone else’s country, as if the bankers and government bureaucrats are the French and the rest of us are all Algerians. I’m a middle-aged man with a college degree and I feel like a Parisian street kid. Maybe I’m not alone. Perhaps, in 2014, we’re all just like Vinz, Hubert and Said were back in 1995.

Perhaps the only question that remains is how much we’ll all enjoy the fall before we hit the concrete.