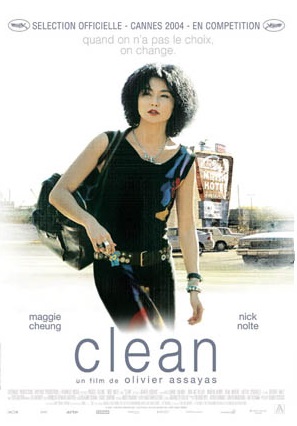 While David Roback, who makes an appearance at the end of French director Oliver Assayas’ Clean, is not exactly a household name, he was the lead guitarist of Mazzy Star, one of the best, and perhaps most representative bands of the 1990s. Mazzy Star, which looked back to the acid rock scene of the 1960s, to The Jefferson Airplane, Jim Morrison and The Doors, celebrated, not fame and fortune, but the beautiful outcast, social isolation, indifference to but not rebellion against the mainstream, and finally oblivion. You could do worse than to think of their lead singer Hope Sandoval as a female Jim Morrison, a sexy rock star poet, but with all the male aggression drained away.

Back in the 1990s, heroin — which has recently become associated with the white underclass — was often celebrated by the cultural elite. Calvin Klein did  advertising campaigns for glossy magazines featuring barely legal models who looked like they’d be willing to suck dick for a fix. The film Trainspotting made close to $100 million dollar at the box office. Even Bill Clinton felt it necessary to issue a statement condemning heroin chic. “The glorification of heroin,” the President said, “is not creative. It’s destructive. It’s not beautiful. It is ugly. And this is not about art. It’s about life and death. And glorifying death is not good for any society.” He was right. Heroin became a curse on the American music industry, destroying the lives of talented performers like Hillel Slovak, Kristen Pfaff, Shannon Hoon, Layne Staley, and  of course Kurt Cobain.

Clean opens in the industrial city of Hamilton, Ontario. Emily Wong, a former French MTV DJ played by Maggie Cheung, and her lover Lee Hauser, a musician played James Johnston of Nick Cave and the Bad Seeds,  are in town, hoping to negotiate a new record contract with their manager Vernon, the always excellent Canadian actor Don McKellar. Evan though Wong and Hauser have had their fifteen minutes of fame, and still have a certain cult appeal for people in the known, it’s over. They’re both over forty. They have a seven-year-old son named Jay. It’s time to grow up and move on with their lives. Unfortunately, however, they’re both addicted to heroin, and  Lee’s friends, and elderly parents who are taking care of Jay in their absence, blame Emily. Emily, who knows she’s being scapegoated, resents her husband for not standing up for her. Lee, who knows his best years are behind him, resents is wife for his own failure. They quarrel. Emily storms out of their spartan, by the week hotel room, drives off, shoots up, then falls asleep in her car. When she returns the next morning, Lee is dead. The police try to blame her for the overdose, and she’s lucky to get off with only six months in jail for possession, and not five or ten years for dealing.

In spite of or perhaps because of the grim subject matter, the early scenes of Clean are remarkably beautiful. Oliver Assayas, a Frenchman, has a real eye for the North American industrial landscape, and there’s real poetry in the way he visualizes Hamilton’s decaying steel mills, and seedy commercial district. It’s hard to exaggerate how good some of it is. It’s cinematography worthy of Robert Frank and his iconic book of still photos The Americans, and I don’t think it’s an accident. Assayas is far too intellectual a filmmaker not to be aware of what he’s doing. We are inside the minds of Emily and Lee on heroin, the blissed out longing for oblivion Mazzy Star expresses in their music. “You’re a ghost on the highway,” Hope Sandoval sung in the opening song of Mazzy Star’s first album She Hangs Brightly, “and I’ll love you forever, ghost on the highway, and I’ll love you forever, forever and ever, and ever and ever.” If nothing in Clean, except perhaps the ending in San Francisco, approaches the visual beauty of the opening in Hamilton Ontario, it’s because Clean is a film about recovery, not oblivion. Lee Hauser is now literally a ghost, and if Emily Wong doesn’t get off that highway,and stop pursuing his memory, their son Jay will never see his mother again.

Six months later, after Emily is released from prison, she’s a broken woman. She’s on methadone. Albrecht and Rosemary Hauser, Lee’s elderly parents played by Nick Nolte and Martha Henry, have gotten a court order giving them custody of Jay, a decision Emily has neither the energy or money to contest. After Albrecht tells her she won’t be allowed to see her son if she doesn’t kick her drug habit, Emily goes back to Paris to try to get her life together. Assayas gives the movie over to Cheung, his ex wife. Even though the rest of clean is set in the iconic cities of Paris and London, most of it is shot indoors. There’s no more beautiful cinematography. We could just as easily be in a suburban office park in New Jersey, but Cheung more than makes up for it. Not only does she manage to act in three languages, English, French and Cantonese, she inhabits the identity of a recovering drug as if it were her own.  The scenes in her uncle’s Chinese restaurant, where out of familial obligation he’s given her a job as a waitress, bring home the harsh reality of having to give up the creative life for the 9 to 5 world. It’s like a bad hangover. The sexy waif has become just a waif, a former icon of heroin chic trying to wake up from the glamorous dream world transformed into a nightmare.

If film critic Jonathan Rosenbaum has labeled Clean ” a disappointment,” I think it’s partially because he doesn’t understand the film’s trajectory. It’s supposed to be disappointing the way waking up from a beautiful dreamworld is disappointing. But I also think he has a point. The scenes in Paris and London, where Emily bounces from dead end to dead end as she tries to work her way back into the music industry — she’s recorded ten songs with a woman she met in prison — not only have a sameness to them. They reflect a certain indecision on the part of Oliver Assayas. He doesn’t quite know how he feels about giving up the drive for beautiful oblivion. if the songs, which were written by Dave Roback of Mazzy Star, are uninspired, they’re uninspired because Roback is not at his best when he’s writing songs about recovery, about the idea of clawing your way back into the world of ordinary misery, to use Freud’s term. If she wants to survive, Emily Wong can never be more than a mediocre forty-year-old singer badly imitating music that celebrates the state of mind that John Keats described in Ode to a Nightingale as being “half in love with easeful death.”

Emily,however, probably will survive, if only because of her son Jay. Her father-in-law, Albrecht Hauser, who had gone to court to keep the little boy from his drug addicted mother, now realizes that he and his wife don’t have very long to live. Even though he allowed his Rosemary to brainwash Jay into thinking that his mother killed his father, that she gave him the drugs that led to the overdose, he now understands that while Emily may have been a bad mother, she’s still the only mother the little boy has. The scenes where Emily and Jay reconcile are in fact so good that you wish they had begun earlier. Maggie Cheung has little or no report with the child actor who plays Jay, but that’s the point. Emily and Jay aren’t mother and son. They’re strangers. They need to get to know each other from scratch. Clean ends with Emily flying to San Francisco to record her songs in David Roback’s studio, but with a promise from Albrecht Hauser that he will give her back the custody of her son when she returns. Will it work out? We don’t know. Assayas leaves that to our imagination, and to an even better movie he could have made instead.