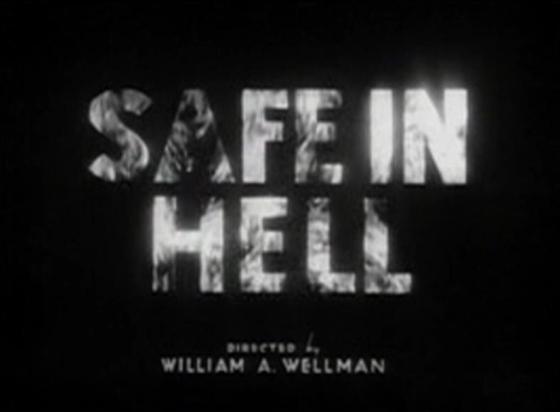 In 1919 an American veteran of the Lafayette Escadrille named William A. Wellman met the actor Douglas Fairbanks. Fairbanks, who was impressed with the young man’s rugged good looks, quickly offered him a lead role in an early silent western called Knickerbocker Buckaroo. Although Wellman, who had come to Hollywood wearing his uniform, could have become a movie star like Fairbanks, he disliked acting, considering it to be an “unmanly” profession, and preferred to make his living behind the camera.

Although Wellman doesn’t have a reputation as a “feminist” director, he put his dislike of being objectified for his good looks to good use in the pre-code film Safe in Hell. I’m not a feminist myself and don’t have a particularly good idea of what constitutes a “feminist movie,” but Safe in Hell sure seems like one to me. Based on a play written by Houston Branch and adapted for the big screen by by Joseph Jackson and Maude Fulton, it not only puts the problem of sexual harassment right at the center of it narrative, it forces us to come to an inevitable conclusion. Men suck.

Safe in Hell opens with Gilda Karlson, played by Dorothy MacKaill, getting a call from her pimp about a client. While it’s clear that Gilda isn’t working as a prostitute by choice – “respectable” jobs weren’t easy to come by in 1931 – she seems more bored than oppressed. When she discovers that the client is a man named Piet Van Saal, however, the boredom quickly turns into disgust, and then horror. Van Saal, her ex-boss, is the reason she’s working as a prostitute in the first place. His wife got her fired after she caught them together. Gilda never explicitly comes out and says that Van Saal’s wife interrupted a rape, but after she clocks him over the head with a wine bottle, and runs out of his apartment just before his cigarette sets the building on fire, all we can say is “you go girl.” Van Saal is a dirt bag and we’re glad he’s (apparently) been burned to a crisp.

The only problem is that the bellboy identified her, and she’s wanted for murder. Enter Carl Erickson, a merchant seaman who’s been away at sea for the past few months, Hilda’s boyfriend, and the one arguably sympathetic (white) man in the whole film. Initially shocked when he finds out she’s that she’s been working as a prostitute, he helps her escape from the police, and stow away on his own ship. Eventually they reach the island of Tortuga. Tortuga is not only a country without an extradition treaty with the United States. It doesn’t have prohibition. “I’m finally in a free country,” Gilda says after she the complimentary bottle of rum someone left in her hotel room.”Tortuga” is also a name that you’ll recognize if you’ve seen enough pirate movies. After Carl pays her rent for a month, and goes back to his ship, Gilda realizes she’s gone from the frying pan into the fire. Until Carl returns, she has to deal with the group of shady men she had noticed in the hotel lobby eyeing her the way a hungry dog would eye a piece of raw meat, alone.

When I said that Carl is the one sympathetic white man in Safe in Hell, I had to specify “white.” The couple who run the hotel, a black man named Newcastle and his wife Leonie, are far more sympathetic than the guests, all of whom are white men who believe that they have some God given right to sex with Gilda. Wellman never quite comes out and says he’s trying to counter the racist propaganda that came out of films like Birth of a Nation, but aside from the clueless, and prudish, Carl, Newcastle is the only man in Safe in Hell who isn’t a potential rapist. Not only is he happily married to Leonie, who’s played by Nina Mae McKinney, once known as the “Black Garbo,” he even slaps down the hand of one of the white men when he tries to touch Gilda without her permission.

The worst man on the island is “Mr. Bruno,” Tortuga’s policeman and executioner. After Gilda finally allows herself to get drunk, and confesses to the other hotel guests that she killed a man in New Orleans, they accept her as one of their own, a fellow outlaw. Mr. Bruno, on the other hand, sees her confession as opportunity. He’s the spider. She’s the fly, and Tortuga is his web. Sooner or later he’s going to have his way with her. He gets his chance when Piet Van Saal shows up on the island. Not only is he still alive, he’s decided to follow Gilda to her special place in hell, where she’s anything but safe. By this time, Wellman has established the air of white male malevolence so well we don’t even have to suspend our disbelief to accept the way Van Saal has escaped from the fire back in New Orleans. He’s just one more devil tormenting Gilda in her own personal inferno. Indeed, when Mr. Burno gives Gilda a revolver and tells her it’s illegal to possess a firearm on Tortuga, we never question why she takes it since it’s clear that Van Saal has every intention of raping her at the first convenient opportunity. Van Saal finds that convenient opportunity soon enough. He tries to rape Gilda, again, and she shoots him dead.

After one of the hotel guests, a lawyer in his former life, defends Gilda in court, she’s apparently beaten the murder rap. Mr. Bruno, however, has no intention of letting her go. Even if the jury votes “not guilty,” he tells her, he intends to charge her with weapons possession, to make her spend six months in one of his jails, where, of course, he’ll be able to rape her each and every day for 180 days. I won’t spoil the ending other than to say that, even though Safe in Hell has anything but a happy ending, Mr. Bruno does not get his way, that William A. Wellman, the macho World War I flying ace, has made a film that to me looks more radical and more feminist than anything you’ll see today. Is it? Once again, I’m not a good judge about what’s a feminist film and what isn’t. But see if for yourself and let me know what you think.