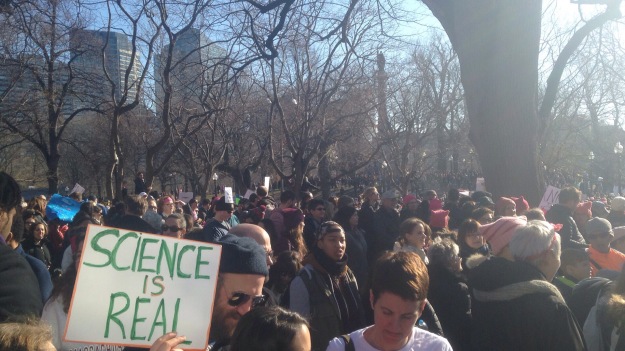 From the anti-war protests of the Bush years through to Occupy Wall Street, Black Lives Matter and the other groups too numerous to list, the left has been gaining momentum and sorely needed independence from the death sentence of center-corporate Democratic party policy. With the influx last week of several hundred thousand people at the Women’s March, many of whom  have never protested or marched before, we’re shaping up to be a more formidable force than we’ve been in decades.

If you’re one of those people who marched for the first time last week, or if you’ve been at it for decades, welcome. We’re gonna need all the people we can get.

Because of this influx, numerous know-it-alls have been trying to seem helpful by questioning the effectiveness of protesting and the sincerity of the protesters. I won’t go into their possible motivations here beyond to say: don’t worry about the haters. Again: we’re gonna need all the people we can get. And some fresh eyes on these issues is always a welcome development.

I’m going to structure this article based around paraphrases of common criticisms I’ve seen. These will be in bold, while responses will be formatted normally.

#1: I understand things are politically FUBAR but why don’t we actually do something instead of just marching or sitting near things all the time?

The march/rally and the sit-in have both been repeated central elements of all the major protest and resistance movements of the last hundred years and beyond for the simple reason that they work.

How are they effective? In no specific order:

-They block the flow of commerce. Being that the major problem here is the extreme concentration of wealth in our society (Trump is an awful symptom), anything that can shut down or even substantially slow the flow of money going in and out of things like banks, shopping malls, etc. gets the attention of the wealthy and forces their hand. If forces their hand because they hate losing money more than literally anything else in the world. The Women’s March shut down the main metro area of nearly every major city in the United States. The economic impacts were likely enormous.

-A march shows that there is in fact broad based support for the cause. This makes the fascists nervous-they know that it’s very likely many of their friends and colleagues disapprove of what they’re doing. This reinforces the social taboos that keep them from acting out. A lot of young men are drifting to the fascists but fascism becomes a much less appealing option for teenage boys once they realize it’s going to severely limit their dating options.

-They work as excellent educational tools for the people that attend them. When people go to a march and they see journalists getting arrested just for being journalists, or their first instance of unwarranted police brutality, they realize pretty quickly that they could’ve been the person getting beaten over the head with a stick. It also gets activists talking to each other and a largely invisible infrastructure develops. Despite a lack of formal infrastructure at Occupy Wall Street, because of it I now have a nation-wide network of other activists with a wide variety of skills I can talk to about what actions to take or any other political questions I might have. The vast bulk of my political education came from long discussions with fellow Occupiers.

-They boost morale and get everybody outside and moving. It gets pretty lonely and depressing on the internet. A march reaffirms both to the people there and to the people on the fence who weren’t there but were considering it that they’re not alone. They think “oh! So someone else is concerned with this too!”

-It gives the marchers a sense of ownership over the movement. Instead of thinking “I gave money to (blank)”, they now think “I was a part of this!”

#2: Where were you when Obama (expanded the surveillance state, drones, etc)?

This response comes from a place of frustration and I’ll admit the left has, at times, been a slow and frustrating thing to be a part of. The long time lefties have been undercut by the “center-left” corporate wing of the Democratic Party too many times to count, and have seen their efforts co-opted like so many football being pulled away from Charlie Brown.

However, while it would have been nice to have seen the 3.6 million Women’s Marchers out in 2001 for the initial Iraq war protests, it didn’t happen. This time it happened. The numbers are here and real positive change is in sight.

On a related note, the level of political literacy in the general population and popular news sources has grown by leaps and bounds in the last 5 years. Even Robert Reich is toying with the idea of abandoning the Democrats.

This is a crisis that effects 99%+ of the population, a population that now knows the banks and the major parties do not represent their interests. No one wants a war with China except a couple people in the White House. The number of extremely broad based issues gaining traction for dissent has grown more in the last 3 months than it did even in the turbulent 9 years since the 2008 crash.

#3 You mean well but by protesting you’re doing exactly what the fascists want!

It’s also a presumption based on a politics that stopped being relevant on November 9th. Yes, the Trump administration is looking for any excuse to ramp up martial law or consolidate power among institutions. It may use the protests against Milo Yiannopolous to do this. However, we also know that this administration will lie about the obvious and apparent. They will find excuses to do what they want regardless of facts or reality. They will only relent on something if they feel like they can’t get away with it.

The power we have, in our numbers and our principles, is to show them exactly how and why they won’t be able to get away with it.

And with that power comes enormous responsibility.