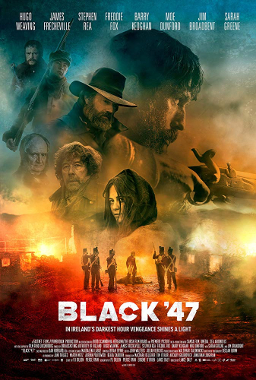 The Irish potato famine of the late 1840s is widely misunderstood in the United States.  First of all, it wasn’t a famine, and it wasn’t about potatoes. That it was a genocide carried out by the English and their collaborators against the Irish peasantry, who needed to be cleared off the land to make way for capitalism and the British Empire, is probably the mainstream view on Bainbridge Avenue or in South Boston. But for most of us, it’s almost always spoken of as if it were a tribal feud between Celt and Anglo Saxon, or as a religious conflict between Catholic and Protestant. There are also a lot of Irish Americans, all English speaking, culturally Anglo Saxon, and mostly part of the middle or upper-middle-class. Don’t expect to hear Joe Biden talking about the crimes of the British Empire on the campaign trail in 2020.

Most American film critics have labeled the Irish film Black ’47 either as a revenge film in the mold of First Blood, or as a “western.” They’re not entirely wrong. Black ’47’s hero Martin Feeney, a veteran of the British invasion of Afghanistan, does resemble Sylvester Stallone’s Rambo. He’s an elite soldier the local cops push a little too far, and when he finally decides to take his revenge, they have no idea what they’re up against. Australian actor James Frecheville, tall, dark, intense, looks a bit like a young Clint Eastwood. If Hollywood decides to reboot Dirty Harry they don’t have to look very far for their leading man. He, and costar Hugo Weaving, are perfect for the film’s high key cinematography, a style that recalls John Ford or Akira Kurosawa. If I were directing a remake of The Searchers, I know who I’d cast as Ethan Edwards.

These same critics, while correctly pointing out some of Black ‘47’s aesthetic influences, often miss the forest through the trees. Yes. It’s a western. But the best American westerns, like the above-mentioned The Searchers, are dealing with the same process that was going on in Ireland in the 1840s, genocide, the Anglo-American empire clearing “empty” land of its aboriginal inhabitants to make way for capitalism. Every American can tell you all about the “communist famine” in Ukraine or during the Great Leap Forward in China.  But how many Americans know that the population actually increased in China under Mao, so much so that the Chinese government in the 1980s had to implement a “one-child policy” to deal with overpopulation? The capitalist genocide in Ireland was a lot more effective. There were 8 million people in Ireland in 1840. There were 4 million in 1876. In 1923, there were only 3 million. What’s more, the staggering loss of life in Ireland would be dwarfed by the tens of millions of people who died in India under the British Empire in the 1870s and 1880s. Take that Stalin. Take that Mao. Compared to British ruling class, you’re amateurs. Yet try to tell this to an American. He’ll probably just start babbling on about Venezuela.

When Martin Feeney deserts the British Army in Afghanistan, and returns “home” to western Ireland, he may be a better killer than the typical British enlisted man of the day, but he’s not at all unusual. If the typical Irish American – like the typical German or Polish American — is a bit of a racist, this has to be seen within the context of Anglo-American imperialism. After Protestant England destroyed the indigenous, and Catholic, culture of the Irish and Highland Scots, they recruited Irishmen and Scotsmen as muscle for the British empire. The very best imperial stormtroopers in India, or in the American west, were the descendants of the very people who were subjected to the capitalist genocide of the Highland Clearances or the Irish “potato famine.” But what would happen, Black ’47 asks, if one of these Celtic supermen turned on his English and Anglo-Irish collaborationist masters? After Martin Feeney deserts the British Army and comes home to a home that’s no longer his and a family that’s been systematically dismantled and driven into madness and death by the local courts and the local police, that’s exactly what happens.

The first thing we notice that the landscape, a landscape a British Lord calls “too beautiful for the Irish,” is a landscape of death, Hieronymus Bosch damped by the filter of an austere desaturated, high key  photography. It is beautiful, but we also see row after row of stone houses, all of which had probably existed for centuries, with their roofs torn off. The collaborationist judicial system has been systematically arresting people for any reason, then using it as an excuse to evict them from their homes, tearing the wood and straw off the top of each house to make sure that anybody who remained would either freeze to death or get rained on and die of the fever. One family of squatters consists of the wife, teenage son, and young daughter of his brother Michael, who was hanged after he violently resisted the evictions. The teenage boy resents Martin’s service with the British Army, but Michael has food and money, and a plan to emigrate to the United States, which was probably the best course of action for the Irish in 1847. Better to deal with WASP American prejudice or even getting drafted into the Union Army and sent to Antietam or Fredericksburg than to stay put in the middle of an ongoing genocide. A few minutes later, however, just like that, Michael’s sister in law, nieces and nephews are all dead. That’s how cheap life was in Ireland in 1847.

When Michael sees his brave, militant nephew, a hotheaded young man on the cusp of adulthood, gunned down by local police, and his dark, beautiful sister in law frozen to death with his little niece after they lose their only shelter, the die is cast. What else could he possibly become but a remorseless killing machine dedicated to bringing the same death and destruction on the English and their local collaborators that they’ve brought to Ireland?

Most of the reviews I’ve seen of Black ‘47 have criticized Hugo Weaving’s character Hannah, another British Army veteran who knew Feeney in Afghanistan, but they largely miss the point. Hannah’s transformation from a brutal police detective who strangles a member of “Young Ireland” for defying his authority to revolutionary who aids Feeney’s escape from the British authorities than participates in an insurrection against a racist landlord, is perfectly logical when you understand that he’s a soldier, not a politician. He’s spent years enforcing British “law” against the natives in Afghanistan as part of a small core of white men who depended on fear to keep them alive. Killing a recalcitrant prisoner has become second nature. Nevertheless, like the young English private Hobson – who coincidentally or not has the same last name as the great English anti-imperialist writer who influenced Lenin – soldiers will rebel. For Hobson, it’s the shock of seeing grain being transported out of the country in the middle of a famine, and the gut-wrenching sight of bags of skin and bones following after the wagons hoping to get a taste of a bit of grain that might fall off. For Hannah it’s seeing Hobson, a fellow soldier, gunned down in cold blood, and knowing that he faces a moral choice. Does he betray a fellow elite imperial soldier to the piggish local police, or does he turn against the empire that formerly employed him. That it’s not an easy choice does the film credit. Hannah is an Englishman. Feeney is an Irishman. Feeney knows he’s going to die. Hannah wants to live, but in the end the old cliché, that soldiers don’t fight for a country or for an ideology, but for their fellow soldiers, is turned on its head. Hannah becomes a revolutionary precisely because he cannot betray a fellow soldier who saved his life back in Afghanistan. It’s not about the English vs. the Irish, or even about capitalism or imperialism. It’s about the bond two men develop during wartime. Turned against the ruling class, it can become deadly.

The genocide against the Irish in the 19th Century was a genocide against white men carried out by white men, but it doesn’t mean it didn’t involve racism. There’s an arrogant, young blond English captain who looks like he was pulled right out of a Nuremberg Rally.  Black ’47 consciously invokes the similarities between the genocide in Ireland and the ongoing genocide against the Indians in North America. “Some men live for the day when a Celtic Irishman is as rare in Ireland as a red Indian in Manhattan,” the most brutal of the film’s Anglo-Irish land lords remarks. When he sees a pretty Irish barmaid, he can barely control his dirty old man’s lust, mainly because he thinks she looks more English than Irish. The English in Ireland clearly believed the Irish were an inferior race, not their close genetic cousins. Irish Catholics in the United States have “white privilege.” Joe Biden will enforce American capitalism as brutally as any WASP. They sure as hell didn’t have it in Ireland back in 1847.